Advocates Call for End to War on Drugs 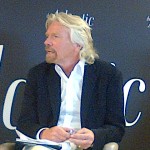 That, according to the Drug Policy Alliance’s Ethan Nadelmann, who first made the statement during a notable recent appearance on HBO’s The Bill Maher show.

Nadelmann was in Washington today to participate in a discussion regarding the war on drugs. The event was hosted by Atlantic Magazine’s Steve Clemons and also featured Sir Richard Branson.

Nadelmann was referring to the issues of personal freedom that surrounds marijuana legalization and decriminalization. Marijuana is just one of the “war on drugs” policies that is tackled in the Global Commission “War on Drugs” report that Branson is a member of.

The commission has consisted of a high level group of world citizens including the former presidents of Mexico, Brazil and Colombia as well as George Papandreau, th Prime Minister of Greece as well as Paul Volker, George Shultz and Kofi Annan, the former UN Secretary General.

Both Nadelmann and Branson cited the experiment in Portugal where no one has been sent to prison for drugs in ten years and drug use and addiction is treated as a public health problem. This has resulted in breaking and entering arrests have dropping and under twenty-one marijuana use dropping dramatically.

In America, they said roughly 200,000 students can’t get an education grant because they have been caught smoking marijuana.

Branson and Nadelmann cited polling that is going the way of decriminalization but that the political will is not there as the issue has been demagogued. They pointed out that the one exception has been the leadership of Senator Jim Webb who has been out front about the needless incarceration and law enforcement and costs to society on the drug issue.

Nadelmann said that the prison industrial complex is indeed the prison industrial complex and that the biggest threat to the income of prison workers and prosecutors was drugs and the decriminalization of them. Branson said that by getting people help rather than prison would pull the rug from illegal drug enterprises. Branson also suggested that by taxing the 300 billion marijuana industry “you could sort out educational problems.”

Of the eleven recommendations in the 2011 War on Drugs report the last one was discussed by both Branson and Nadelmann; “Act urgently: the war on drugs has failed, and policies need to change now.”