Why We Must Fix Our Prisons 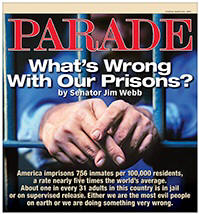 America’s criminal justice system has deteriorated to the point that it is a national disgrace. Its irregularities and inequities cut against the notion that we are a society founded on fundamental fairness. Our failure to address this problem has caused the nation’s prisons to burst their seams with massive overcrowding, even as our neighborhoods have become more dangerous. We are wasting billions of dollars and diminishing millions of lives.

We need to fix the system. Doing so will require a major nationwide recalculation of who goes to prison and for how long and of how we address the long-term consequences of incarceration. Twenty-five years ago, I went to Japan on assignment for PARADE to write a story on that country’s prison system. In 1984, Japan had a population half the size of ours and was incarcerating 40,000 sentenced offenders, compared with 580,000 in the United States. As shocking as that disparity was, the difference between the countries now is even more astounding–and profoundly disturbing. Since then, Japan’s prison population has not quite doubled to 71,000, while ours has quadrupled to 2.3 million.

The United States has by far the world’s highest incarceration rate. With 5% of the world’s population, our country now houses nearly 25% of the world’s reported prisoners. We currently incarcerate 756 inmates per 100,000 residents, a rate nearly five times the average worldwide of 158 for every 100,000. In addition, more than 5 million people who recently left jail remain under “correctional supervision,” which includes parole, probation, and other community sanctions. All told, about one in every 31 adults in the United States is in prison, in jail, or on supervised release. This all comes at a very high price to taxpayers: Local, state, and federal spending on corrections adds up to about $68 billion a year.

Our overcrowded, ill-managed prison systems are places of violence, physical abuse, and hate, making them breeding grounds that perpetuate and magnify the same types of behavior we purport to fear. Post-incarceration re-entry programs are haphazard or, in some places, nonexistent, making it more difficult for former offenders who wish to overcome the stigma of having done prison time and become full, contributing members of society. And, in the face of the movement toward mass incarceration, law-enforcement officials in many parts of the U.S. have been overwhelmed and unable to address a dangerous wave of organized, frequently violent gang activity, much of it run by leaders who are based in other countries.

With so many of our citizens in prison compared with the rest of the world, there are only two possibilities: Either we are home to the most evil people on earth or we are doing something different–and vastly counterproductive. Obviously, the answer is the latter. 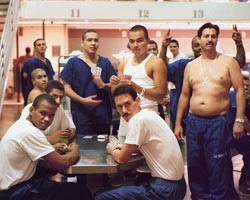 Over the past two decades, we have been incarcerating more and more people for nonviolent crimes and for acts that are driven by mental illness or drug dependence. The U.S. Department of Justice estimates that 16% of the adult inmates in American prisons and jails–which means more than 350,000 of those locked up–suffer from mental illness, and the percentage in juvenile custody is even higher. Our correctional institutions are also heavily populated by the “criminally ill,” including inmates who suffer from HIV/AIDS, tuberculosis, and hepatitis.

Drug offenders, most of them passive users or minor dealers, are swamping our prisons. According to data supplied to Congress’ Joint Economic Committee, those imprisoned for drug offenses rose from 10% of the inmate population to approximately 33% between 1984 and 2002. Experts estimate that this increase accounts for about half of the dramatic escalation in the total number imprisoned over that period. Yet locking up more of these offenders has done nothing to break up the power of the multibillion-dollar illegal drug trade. Nor has it brought about a reduction in the amounts of the more dangerous drugs–such as cocaine, heroin, and methamphetamines–that are reaching our citizens.

Justice statistics also show that 47.5% of all the drug arrests in our country in 2007 were for marijuana offenses. Additionally, nearly 60% of the people in state prisons serving time for a drug offense had no history of violence or of any significant selling activity. Indeed, four out of five drug arrests were for possession of illegal substances, while only one out of five was for sales. Three-quarters of the drug offenders in our state prisons were there for nonviolent or purely drug offenses. And although experts have found little statistical difference among racial groups regarding actual drug use, African-Americans–who make up about 12% of the total U.S. population–accounted for 37% of those arrested on drug charges, 59% of those convicted, and 74% of all drug offenders sentenced to prison.

Against this backdrop of chaos and mismanagement, a dangerous form of organized and sometimes deadly gang activity has infiltrated America’s towns and cities. It comes largely from our country’s southern border, and much of the criminal activity centers around the movement of illegal drugs. The weapons and tactics involved are of the highest order. 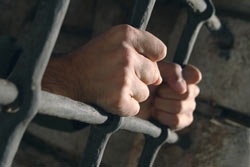 The Mexican drug cartels, whose combined profits are estimated at $25 billion a year, are known to employ many elite former soldiers who were trained in some of America’s most sophisticated military programs. Their brutal tactics took the lives of more than 6000 Mexicans last year alone, and the bloodshed has been spilling over the border into our own neighborhoods at a rapid pace. One terrible result is that Phoenix, Ariz., has become the kidnapping capital of the United States, with more than 370 cases in 2008. That is more incidents than in any other city in the world outside of Mexico City.

The challenge to our communities is not limited to the states that border Mexico. Mexican cartels are now reported to be running operations in some 230 American cities. Other gang activity–much of it directed from Latin America, Asia, and Europe–has permeated our country to the point that no area is immune. As one example, several thousand members of the Central American gang MS-13 now operate in northern Virginia, only a stone’s throw from our nation’s capital.

In short, we are not protecting our citizens from the increasing danger of criminals who perpetrate violence and intimidation as a way of life, and we are locking up too many people who do not belong in jail. It is incumbent on our national leadership to find a way to fix our prison system. I believe that American ingenuity can discover better ways to deal with the problems of drugs and nonviolent criminal behavior while still minimizing violent crime and large-scale gang activity. And we all deserve to live in a country made better by such changes.