As our nation focuses on the threat of global terrorism and the possibility of war in Iraq, are we forgetting about our most important ally in Asia? PARADE recently sent Contributing Editor James Webb, an Asia expert, to the Far East to take Japan’s pulse. A former Secretary of the Navy, Webb is the author of “The Emperor’s General,” a novel about America’s occupation of Japan after World War II. 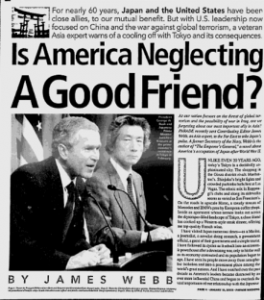 For nearly 60 years, Japan and the United States have been close allies, to our mutual benefit. But with U.S. leadership now focused on China and the war against global terrorism, a veteran Asia expert warns of a cooling off with Tokyo and its consequences.

Unlike even 20 years ago, today’s Tokyo is a decidedly sophisticated city. The shopping in the Ginza district rivals Manhattan’s. Shinjuku’s bright lights and crowded pachinko halls hint at Las Vegas. The ethnic mix in Roppongi’s clubs and along its sidewalks seems as varied as San Francisco’s.

On the roads in upscale Hiroo, a steady stream of Mercedes and BMWs pass by European coffee shops. Inside an apartment whose terrace looks out across the skyscraper-filled landscape of Tokyo, a close friend has cooked up a Western-style steak dinner, offering me top-quality French wine.

I have visited Japan numerous times—as a Marine, a journalist, a novelist doing research, a government official, a guest of their government and a simple tourist. I have followed its cycles as it rebuilt into an economic powerhouse after a devastating war, only to hit the wall as its economy contracted and its population began to age. I have seen its people move away from xenophobic isolation and into a prominent place among the world’s great nations. And I have watched over the past decade as America’s leaders became distracted by an ever more influential China and began to overlook the vital importance of our relationship with the Japanese.

In the years since World War II, the United States and Japan have become inseparable in many ways. “Japan’s ties with the United States are almost a given,” says Masakazu Yamazaki, one of Japan’s leading intellectuals, who has studied at Yale and taught at Columbia. “We share similar political systems, freedom of speech and cosmopolitan cultures. Much of our music has begun to blend, as have our societal structures. I cannot imagine Japan getting as close to any other Asian country as it is with the United States.”

But now Japan’s leaders seem to be edging away from the strong bilateral relationship that has guaranteed economic and military security in East Asia for 50 years. Part of this is a reaction to America’s economic and strategic courting of China and an obsession with the Middle East. Part is a
consequence of the globalization of the world’s economy. And part is their realization that American solutions are not always relevant to Japan’s unique society.

Fukushiro Nukaga, a deputy secretary general of the ruling Liberal Democratic Party, did not hesitate when I asked him to describe the point of greatest friction in U.S.-Japan relations. “America must stop forcing its issues on other countries,” said the former defense minister and minister of the economy, who is known as a strong friend of the U.S. “You must avoid the impression that globalization equals Americanization.”

It is not a simple thing to read Japan’s moods. In its makeup and its approach toward problem-solving, Japan is in many ways the antithesis of the United States. We are a multicultural, immigrant nation scarcely 200 years old. They are an ancient, ethnically homogeneous people who can trace their imperial family’s roots back more than 2000 years.

As Americans, we pride ourselves on our differences and fiercely protect them. The Japanese tradition is that of a “nation family,” with strong allegiance to the common good. We settle our issues through loud
disagreement, believing that cultural abrasion is the grist of political creativity. They believe in harmony, preferring internal debate and policies designed to bring the nation together. We are restless, inventive, quick to discard. They are patient, adaptive, with a genius for perfection. Our successes and failures are largely individual. Theirs belong to the group, and if an individual fails, he quickly accepts responsibility to preserve the group’s integrity.

Our relationship with Japan has been historically unique and vital to both countries. Japan renounced war after World War II with a constitution that limits its use of military force strictly to self-defense. It has survived for half a century in one of the world’s most unstable regions by exchanging vital bases for U.S. military protection. Japan’s postwar growth was based largely on exporting goods to the United States, almost inextricably intertwining our economies in the process. And they backed us so completely in international affairs that they were criticized as being “America’s little brother.”

But times change and relationships evolve. How much does Japan mean to us now? And, just as important, how much do we mean to the Japanese?

Much has been written about Japan’s economic troubles, but the greatest long-term issues facing the country are incidental to its economy. East Asia has become ever more unstable due to Chinese growth and North Korea’s acquisition of nuclear weapons. There have been suggestions from some quarters that Japan break free of its defense relationship with the United States and from others that it develop its own nuclear capability.

Domestically, the country’s population is shrinking and growing older. Japanese leaders will soon be struggling with the dilemma of either following the U.S. model and dramatically increasing immigration or of possibly reducing Japan’s standard of living and international influence due to a dwindling workforce.

Yukio Okamoto, a special adviser to the Japanese cabinet who spent several years at the Japanese embassy in Washington, is a supporter of the U.S.-Japan defense alliance. “Our relations with the U.S. are at a very mature state,” he says. “The trend is toward bolstering the U.S. relationship rather than the other way around.” Mentioning Japan’s strong support of the U.S.-led war against international terrorism, he points out that Japanese naval ships regularly operate with U.S. Navy ships in the Indian Ocean.

How Japan defines self-defense in today’s complicated world has become a political hot potato. Shinzo Abe, a congressman who serves as the prime minister’s deputy chief cabinet secretary, caused a stir several months ago when he claimed that developing nuclear weapons might be justifiable. Abe, son of a foreign minister and grandson of a prime minister, studied at the University of Southern California. He is one of several prominent Japanese, along with chief cabinet secretary Yasuo Fukuda, himself the son of a prime minister, who are pushing for a more independent defense relationship. “The U.S.-Japan alliance is necessary for our security,” Abe says. “But the defense relationship between our countries should be complementary and not dependent.” The upshot of this would be a Japan unhinged from U.S. protection, creating yet another power center in East Asia.

Perhaps Japan’s greatest challenge is a future in which its population will be both older and smaller. With Japanese couples marrying later and a fertility rate of 1.33 children per family, the Japanese are not sustaining their current population of 127 million. Within the next decade, the country is expected to begin shrinking—to about 100 million people by mid-century.

At the same time, Japan enjoys the longest life expectancy in the world. “There is no historical model for where we are heading,” says the philosopher Masakazu Yamazaki. “We are facing a situation where one child may be supporting two parents and four grandparents.”

The population of foreign nationals has increased by 15% since 1995, to 1.8 million people, not counting an estimated 300,000 who are in the country illegally. Koreans dominate these numbers, and Asia’s ever-present “Chinatowns” have prospered in Kobe, Yokohama and Nagasaki since the 1860s. But the latest wave of immigration is different, Japanese leaders say. As Yukio Okamoto points out, “70% of the robberies in Tokyo are [committed by] illegals, of whom 90% are Chinese.”

Nobuko Fukuhara, deputy director of the Ministry of Justice’s Immigration Bureau, summarizes the current Japanese view toward wider immigration. “Bringing in unskilled labor would create unnecessary problems for our society,” she says. “It would also negate our move toward national innovation. We can best address future labor shortages with a greater emphasis on the efficiencies brought about by industrial robotics and advanced technology.”

Still a potent force for democracy

What kind of future is in store for Japan? The best prediction is that Japan will become smaller, more independent, still ethnically homogeneous and still one of the most important democratic forces in the world. “Change is the key to Japan,” says Yamazaki—a rather surprising perspective when one considers Japan’s obsession with its traditions and, indeed, with its past. “We respect our history, but we know that the future must be addressed on logical grounds.”

Will the United States still be Japan’s most important friend in such a future? One hopes so—for our sake, for theirs and for the stability of Asia. Toward that end, it is crucial that our relationship with Japan not be diminished as we sort out our future with China, and we should be careful when suggesting “American” solutions to intrinsically Japanese problems.

On my last night in Tokyo, I am, as ever, walking the streets, absorbing the emotional forces of this energetic and historic people. What will Japan look like? I wonder as I stare at the high walls that rise from the moat surrounding the emperor’s palace grounds. How will it change? As I walk, a young boy bumps into me with his bicycle. I turn to him. He bows deeply from the bicycle seat as he passes, a gesture of apology and respect. And I know that no matter how much Japan changes, at its core, the culture will remain the same.

Where Japan Stands In The War Against International Terrorism
Japan has strongly supported the U.S.-led war against international terrorism. Despite the restrictive “self-defense” clause in its constitution, for the first time since World War II Japanese naval ships have been sent outside Japanese waters on operational missions. Japanese refueling vessels have operated alongside U.S. Navy ships in the Indian Ocean for more than a year, and in December a powerful Japanese Aegis warship was dispatched to join them. Support for a war against Iraq is more tentative. The Japanese government has raised only the possibility of participating in peacekeeping efforts after a war. And a recent survey by the Asahi Shimbun newspaper showed that 57% of Japanese are opposed to backing any U.S. military action against Baghdad.
—J.W.

A MacArthurian Regency In Baghdad?
Advocates of a war to oust Iraqi President Saddam Hussein often predict a post-war military occupation similar to the U.S. occupation of Japan following World War II. But there are major differences. U.S. military forces never set foot in Japan until its emperor had formally surrendered and prepared its citizens for our arrival. Nor did Gen. Douglas MacArthur change the Japanese regime when he took over as proconsul after World War II. Instead, he was careful to work his changes through the existing government and took pains to preserve the integrity of Japan’s imperial family. Moreover, the Japanese culture is in no way similar to Iraq’s. The Japanese are a homogeneous people who place a high premium on respect, and they fully cooperated with MacArthur’s forces after having been ordered to do so by their emperor. The Iraqis, by contrast, are a multi-ethnic people driven by competing factions, many of whom would view U.S. occupation forces as infidels invading the cradle of Islam. Finally, Japan is an island nation whose borders could be defended against outside interference, while Iraq lies in the midst of the world’s most violent center of anti-American terrorism.
—J.W.