Webb hopes for progress on Futenma 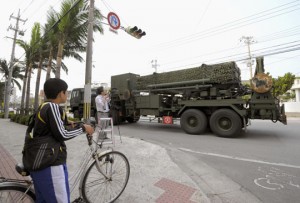 U.S. Sen. Jim Webb expressed hope in Tokyo Thursday that the contentious relocation of the Futenma air base will move forward now that Japan and the United States have agreed to delink the issue from the transfer of thousands of marines to Guam.

The relocation has been blocked by local opposition, with many Okinawa residents, who refer to Futenma as the most dangerous base in the world, trying to get the facility removed from the prefecture.

Japan and the U.S. have been engaged in talks over reviewing a 2006 bilateral agreement to transfer 8,000 U.S. Marines from Okinawa to Guam in exchange for relocating Futenma from Ginowan to Henoko in the northern part of the island. In early February, the two governments simultaneously announced that they would “delink” the two to push the base move forward.

During a news conference at the Foreign Correspondents’ Club of Japan, Webb, a former marine, stressed that it is important to resolve the issue in a “timely way.”

Webb, along with Democrat Carl Levin and Republican John McCain, proposed last year that Futenma be consolidated with Kadena air base.

That idea, however, has repeatedly surfaced only to then disappear. Japan has rejected it because of strong opposition from local residents, who often complain of noise pollution, while the U.S. government has turned it down for military reasons.

Webb said the latest proposal from the senators doesn’t amount to a simple merger. Rather, it would involve the U.S. air force dispersing its Kadena operations to other areas, including Guam, and moving the marines’ aviation unit in Futenma to Kadena. He urged the two governments to consider the proposal.

“I happen to believe . . . that there is a better approach that we could take on Okinawa that would be less costly, more timely and could have less of a burden on the people of Okinawa,” he said.