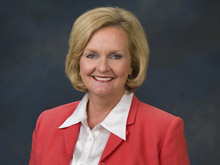 Two senators say they want to infuse some accountability into overseas contingency contracting with a new bill that would require the Defense Department and other agencies to improve their planning and oversight of wartime contracting and require automatic suspensions of contractors accused of wrongdoing.

Sens. Claire McCaskill (D-Mo.) and Jim Webb (D-Va.) wrote the original legislation that established the bipartisan Commission on Wartime Contracting. They said the new bill they introduced Thursday is a response to the findings the commission made in its final report late last year.

“I know I’m very grateful to the members of the commission. Our job is to make sure that they don’t become one more report on a shelf to gather dust,” McCaskill said. “We want to make sure that the report they issued works its way into the culture and fabric of the Pentagon and the State Department.”

The commission found that the U.S. lost between $31 billion and $60 billion to waste, fraud and abuse in wartime contracts during operations in Iraq and Afghanistan, and it made 15 recommendations aimed at solving the problem.

One area the commission called out was insufficient oversight of contingency contracting at the Pentagon. In line with the recommendations, the new bill would establish lead inspectors general for contingency operations in the State and Defense departments during wartime. It would also put the Office of Management and Budget in charge of figuring out how to pay for overseas contingency operations in advance and advising the President and Congress on the matter.

“We want to elevate oversight responsibility, we want to require the government to identify how it’s going to pay for military operations overseas, we want to improve the contracting process through greater transparency, competition and professional education, and we want to insert additional protections for contractor accountability,” McCaskill said. “What we don’t want to do is add a lot of bureaucracies and paperwork to a process that’s already cumbersome. We believe this legislation strikes the right balance.”

Along the lines of contractor accountability, there are several get-tough provisions. Acquisition regulations would be rewritten to automatically suspend vendors who are accused of crimes connected with a wartime contract, who owe money to the government in connection with a wartime contract, or who are accused of fraud in connection with any federal contract. None of the suspension provisions would require a guilty determination in court.

McCaskill said she and Webb gleaned from the wartime commission’s work that government suspension and debarment officials were held back by bureaucratic handcuffs that kept them from using those tools effectively.

“The weight of those processes was weighing down the ability to hold contractors accountable,” she said. “It’s similar to the fact that we were giving performance bonuses to contractors that weren’t performing very well. All of this is under the headline of setting up a structure where there’s someone who’s in charge of this in contingency situations and giving the departments the tools to make firm and speedy decisions to suspend bad actors.” 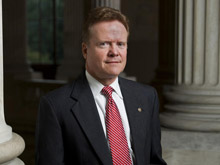 DoD, State and the U.S. Agency for International Dvelopment would each have to designate one official and a full-time staff that does nothing but handle suspension and debarment. That organization would have to be completely separate from the department’s acquisition functions.

The bill has other provisions contractors object to. For example, it would put limits on the length of warzone contracts: three years for competitively-bid awards and one year for noncompetitive awards. Also, it would allow only one tier of subcontracting in wartime contracts, and vendors would lose their right to include their own responses to the government’s description of their past performance in federal databases.

“While we strongly support the bill’s attempts to professionalize the acquisition workforce and improve upfront government planning for contingency operations, we have deep concerns about provisions that lay waste to due process, fairness and transparency, and run contrary to smart government and smart contracting practices,” said Stan Soloway, the president of the Professional Services Council, a contractor industry group. “The inflexibility of many provisions in this bill could actually prevent agencies from efficiently and effectively meeting their missions in a fluid contingency environment.”

Nonetheless, Webb insisted the legislation is not anti-contractor.

“This is not about bashing government contractors,” he said. “I think it’s very important to say that they’re an essential part of our national security. This is good-government legislation, and it’s a recognition of the importance of contracting, not a recommendation that we do away with it.”

In hearings just after the wartime contracting commission released its final report, DoD officials sought to reassure Congress that they were working to improve contingency contracting.

“The department, I think, has got it,” Frank Kendall, the acting undersecretary of Defense for acquisition, technology and logistics told Congress in October. “We’ve got the fact that when we put contractors out there in equal numbers to the soldiers we put on the ground, we’ve got to manage them just as effectively.”

McCaskill and Webb said they agree DoD has made tremendous strides since 2007, when overseas contracting scandals prompted the creation of the wartime commission. And they don’t doubt the Defense Department’s sincerity when it says it’s working to improve on its own.

“There’s always a tension between the legislative branch and the executive branch,” Webb said. “But I think this is legislation that will be beneficial to their process as well, and not burdensome in terms of adding more people to the bureaucracy or new offices or things like that.”

“I do believe there’s a sincere desire on the part of our military leadership to do a better job on contracting,” said McCaskill. “But one of my ‘aha’ moments on this was trying to get someone to say they were the ones responsible for contingency contracting. And, if you can’t identify who’s responsible, you can never get accountability. Everyone just points fingers. And now we’re providing a framework so that we have some place to look when contracting goes bad.”