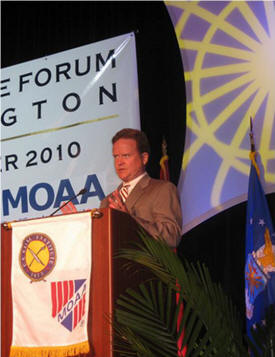 MOAA and the U.S. Naval Institute joined forces to host Defense Forum Washington Sept. 10 at the Hyatt Regency in Washington, D.C. The forum focused on “A New Normal: How Is the War Within Transforming Our Force and Families?”

A distinguished panel of uniformed service and administration leaders, legislators, health care providers, and wounded warriors and their caretakers and family members discussed the topics of “Navigating Recovery: Are We Meeting Needs and Expectations?”, “Confronting the Reintegration Process — Embracing the Experience,” and “The New Normal: Hope for the Future.”

MOAA President Vice Adm. Norb Ryan Jr., USN-Ret., introduced keynote speaker Sen. Jim Webb (D-Va.), who kicked off the event. Webb, a combat Marine who served in Vietnam, spoke about the lack of dwell time for deploying servicemembers, many of whom are serving yearlong deployments followed by a year at home. A traditional deployment schedule, Webb said, is two years at home for every year a servicemember is deployed.

“Dwell time is not down time,” Webb said, adding that even during dwell time, servicemembers are never off. “[They’re] training. … [They’re] doing all the sorts of things that make [them] … ready to go when [they] have to deploy again.”

Webb then addressed the importance of the new Post-9/11 GI Bill to servicemembers who served in the military since the Sept. 11, 2001, attack. Webb introduced the bill on his first day as senator and fought until it was passed less than 16 months later.

“There was not a happier day in my life,” Webb said, “then when that bill passed and became law. We’re going to give these people a chance at a first-class future, which they have earned in a very unique way.” Since the bill was passed, more than 600,000 veterans have signed up to receive benefits from that GI bill.