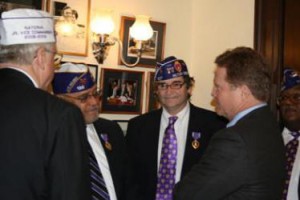 Senator Jim Webb (D-VA) today was honored with the Military Order of the Purple Heart’s (MOPH) Special Leadership Award in recognition of both his work to create a new post- 9/11 GI Bill and his role as advocate for America’s men and women in uniform. A Marine combat veteran, Senator Webb is a two time Purple Heart recipient.

Each year, MOPH pays special recognition to one member of Congress who best demonstrates inspirational leadership and distinguished service to the nation’s veterans.

“I am honored to receive this top leadership award from the Military Order of the Purple Heart,” said Senator Webb. “As someone who grew up in and around the military, who had the privilege of serving, and whose son and son in law still serve today, I take very seriously our continuing commitment to our nation’s veterans and our active duty service members. I am particularly proud that the Post-9/11 GI Bill that I introduced became law last year. With this legislation, we were able to affirmatively recognize the service of the newest generation of veterans with educational benefits that will truly give them the opportunity for a first class future.”

Upon receiving the award, Senator Webb announced his intention to introduce legislation to establish a permanent commemorative Purple Heart postage stamp to honor recipients of the Armed Services’ oldest military award. The Purple Heart is presented in the name of the President to service members who are wounded or killed in conflict.

MOPH National Commander Jeff Roy presented the Inspirational Leadership Award to Webb. “Senator Jim Webb, a distinguished Member of the Senate Committee on Veterans’ Affairs, a decorated combat Veteran of Vietnam, distinguished author, and former Secretary of the Navy, has demonstrated exceptional concern for the combat-wounded and their families,” said Roy. “He is a strong advocate for ensuring that America meets its obligation to those men and women who wear and have worn the uniform for our nation’s military.”

Roy continued: “Senator Webb continually promotes a positive image of the veteran community, and his dedicated efforts have resulted in significant and beneficial change in the earned rights of all veterans. His new GI Bill is seminal legislation that will provide today’s veterans with the same economic and educational opportunities as those of the greatest generation.”

Senator Webb’s involvement with the military has transcended his entire adult life. After graduating from the Naval Academy he stood first among 243 Marines in the demanding regimen of the Basic School in Quantico, Virginia, and went immediately to Vietnam, where as a rifle platoon and company commander in the infamous An Hoa Basin he was awarded the nation’s second and third highest awards for valor, the Navy Cross and the Silver Star Medal, as well as two Purple Hearts.

Over the course of his career in government and as a writer, Webb has received numerous other awards from veterans organizations, including The Military Coalition’s 2008 Award of Merit, the Veterans of Foreign Wars (VFW) 2008 Gold Medal and Citation of Merit and their 2001 News Media Award, the American Legion’s National Commander’s Public Relations Award, the Marine Corps League’s Iron Mike award, and the Medal of Honor Society’s Patriot Award—an honor he shares with former President Ronald Reagan.

In September 2008, Webb was named one of Esquire Magazine’s 75 most influential people of the 21st Century for doing “more to repair his party’s relationship with the military” than anyone since the end of the Vietnam War. He also received the “Marine for Life” award at the annual U.S. Marine Corps Birthday Gala in New York City celebrating the Corps’ 233rd birthday.