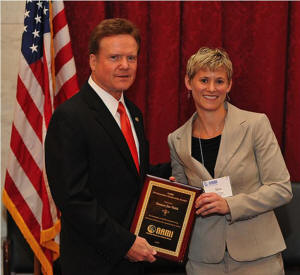 Senator Webb was honored with the Outstanding Legislator Award by the National Alliance on Mental Illness (NAMI) for his leadership on behalf of people living with mental illness in the criminal justice system. NAMI is the nation’s largest grassroots organization dedicated to improving the lives of individuals and families affected by mental illness. NAMI has a national organization as well as state organizations and local affiliates in more than 1,100 communities across the country.

“With four times as many mentally-ill persons in our prisons as in mental health institutions, it is clear that mentally-ill Americans are not receiving the kind of treatment they really need,” said Senator Webb. “I introduced the National Criminal Justice Commission Act to address such disparities in a fair and effective manner. I am deeply honored to receive this award from NAMI and the men and women who are dedicated to this cause, day in and day out. ”

“We commend Senator Webb’s leadership in focusing on the problems in America’s prisons, the over-utilization of jails and prisons as de facto ‘treatment centers’ and the stark reality that these facilities are not equipped to provide treatment,” said Mira Signer, Executive Director of NAMI Virginia.

Senator Webb introduced the bipartisan National Criminal Justice Commission Act in 2009 to create a blue ribbon, national commission to take a comprehensive review of our criminal justice system. Part of this review will include the treatment of mentally-ill individuals in the criminal justice system. The Commission would bring together the best minds in America to confer, report, and make concrete recommendations about how to reform the justice system. This legislation has garnered wide support in Congress and from interest groups representing a range of backgrounds and political viewpoints.

Senator Webb has been an advocate in the Senate for those affected by mental illness. He cosponsored the Mental Health Parity Act of 2007, which requires insurers to provide equal coverage of mental health benefits and medical/surgical benefits. He also has supported funding for Arlington County’s mental health and substance abuse program, for Chesterfield County’s Community Corrections Dual Treatment program and for the Virginia Department of Behavioral Health and Developmental Services.