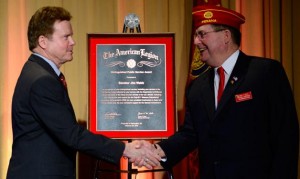 “I thank you for recognizing me for this award,” Webb said. “And to all of you here I appreciate what you have done for your country and what you are doing now on behalf of those who serve.”

Webb earned an appointment to the U.S. Naval Academy and graduated in 1968 as a second lieutenant in the Marine Corps. He served in Vietnam as a platoon leader, earning the Navy Cross, Silver Star, two Bronze Stars and two Purple Hearts. After leaving the Marine Corps in 1972, he earned a law degree, served as the first assistant secretary of defense for Reserve Affairs and then as Secretary of the Navy. He later ran for U.S. Senator in Virginia in 2006.

National Commander Jim Koutz called Webb “a man of courage, intelligence and integrity,” who was honored with the award for his service to the Marine Corps, Department of Defense, Naval Academy and Post-9/11 GI Bill. Webb expressed to the audience of Legionnaires and Sons of The American Legion and Auxiliary members the reasons for his strong feelings about issues facing veterans today.

“First is my respect for The American Legion. I learned when I was a committee counsel how important it was to work directly with the major veterans groups when you are considering legislation,” Webb said. “When I served on the (nonpartisan) veterans committee, we would sit down and examine what we thought was best for the veterans, pull in the major veterans groups to take advantage of the years of experience that people who serve on these veterans groups have and come up with solutions on (veterans) issues. I would like to see, quite frankly, more of that in the present congressional system because as all of you know, there are so few staffers in the United States congress that have military service.”

Webb expressed appreciation for all those who step forward to serve, as he knows what it’s like to have a loved one in harm’s way. Webb’s son Jimmy dropped out of college and enlisted in the Marine Corps after taking the “ultimate father-son trip” to Saigon. Webb took him to battlefields where he fought as a Marine and when Jimmy came back to the states he said, ‘Why am I in school when there a people doing what our country needs?’

“So I know what it’s like to sit at home and wake up every morning wondering if your kid is still alive,” Webb said. “Those things motivate me every day of my life and they were the principal reason that the day I was sworn into the Senate, I put into the hopper the Post-9/11 GI Bill.

“When I put that GI Bill in the hopper I said, ‘You know, we keep saying this is the next greatest generation, but remember what we did for the greatest generation – we gave them the best GI Bill in history, we paid their tuition, bought their books and gave them a stipend. Let’s do that again.’ And we did. Now there’s 900,000 (veterans and servicemembers) who have a chance of a first-class future because of the Post-9/11 GI Bill.”

Webb was also the recipient National Commander’s Public Relations Award in 1979 after writing “Field of Fire,” a novel about several Marines serving during the Vietnam War. “The public relations award is on my office wall and this award, which I deeply appreciate, will join it.”