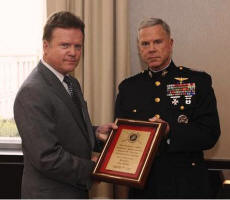 United States Senator Jim Webb (D-VA) was honored this week by the Marine Corps Reserve Association with the Frank M. Tejeda Leadership Award for his commitment to national defense and his strong support of the Marine Corps.

A high school dropout, Frank Tejada served as a combat Marine in the Vietnam War, where he earned the Silver Star, the Bronze Star and Purple Heart medals. He enrolled in college on the G.I. Bill and earned his law and two post-graduate degrees. Tejada served in both chambers of the Texas legislature before being elected to the U.S. House of Representatives in 1992, where he died of cancer in 1997.

“Frank Tejada exemplified the strong impact the Marines can have on an individual’s life,” said Webb. “As a Marine, I can attest to the key role the Corps plays in developing leaders for our country. I’m honored to be recognized by an organization that dedicates itself to supporting the men and women in the Marine Corps Reserve.”

Webb served as a combat Marine in Vietnam and was awarded the Navy Cross, the Silver Star Medal, two Bronze Star Medals, and two Purple Hearts. After earning a law degree, Webb served in the U.S. Congress as counsel to the House Committee on Veterans Affairs. In 1987, he became the first Naval Academy graduate in history to serve in the military and then become Secretary of the Navy. In the U.S. Senate, Senator Webb currently chairs the Personnel Subcommittee of the Armed Services Committee and also sits on the Veterans Affairs, Foreign Relations, and Joint Economic Committees.

General James Amos, Commandant of the Marine Corps, said: “There is no greater advocate for Marines in Congress than Senator Webb. Everywhere the Sergeant Major and I visit, there is one thing we always hear from Marines and their families – praise for the Webb G.I. Bill.”

On his first day in office, Senator Webb introduced a new GI Bill to provide service members and veterans of the post-9/11 era with comprehensive educational benefits similar to those provided to veterans of WWII. Since the bill became law in 2008, over 822,000 veterans have applied for their benefits to attend college or other post secondary programs.