The Military Coalition Award of Merit for Contributions to Military Families 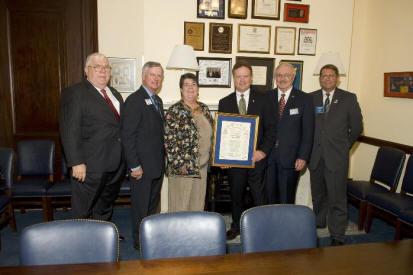 Senator Jim Webb (D-VA) was honored today with The Military Coalition’s Award of Merit for his leadership in successfully steering his Post-9/11 GI Bill into law. The consortium of 35 military and veterans groups presents this top honor to individuals who have championed the causes of pay and benefits improvements for military families.

“Many people told Senator Webb that he was asking for too much in trying to reestablish a GI Bill that actually paid the full cost of a college education,” said Joe Barnes, a TMC co-chairman and national executive director of the Fleet Reserve Association. “But he crafted a piece of legislation that made so much sense and he built a coalition of cosponsors, veterans organizations, and public support that could not be ignored. The result is a new package of benefits that will change the lives of service members and their families and will also make a significant, positive impact on America’s future.”

“On my first day in office, we began with the simple concept that those who have been serving since 9/11 should have the same opportunity for a first class educational future as those who served during World War II,” said Webb. “Today, we can celebrate the achievement of that goal. I am honored to receive this award from The Military Coalition, a group of military organizations that were integral to this bill’s success.”

“This new program is about properly honoring service to one’s country, and taking care of the people who have taken care of us,” said Webb.

Over the course of his career in government and as a writer, Webb has received numerous other awards from veterans organizations, including a 2008 Gold Medal and Citation of Merit and the 2001 News Media Award from the Veterans of Foreign Wars, the American Legion’s National Commander’s 2008 Public Relations Award, the Marine Corps League’s Iron Mike award, and the Medal of Honor Society’s Patriot Award, an honor he shares with former President Ronald Reagan.