The 68-year-old former U.S. senator from Virginia, Vietnam combat veteran and novelist talked to the Bulletin about the war that changed his generation, what worries him about America’s future and his new memoir, I Heard My Country Calling.

Q: Your book is about life in the military, both as a dependent of your military father and as a military man yourself. There’s a lot about your father.

A: He was a very hands-on dad and had the greatest influence of any one person on my life. He was a firm disciplinarian, but he really taught me the basics of leadership that carried through everything I’ve ever done.

Q: The 50th anniversary of the Gulf of Tonkin Resolution comes up this summer. How did the Vietnam War shape your generation? 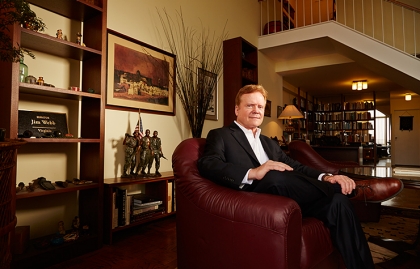 Q: Should we have gone into Vietnam?

A: There were valid reasons for us to attempt to aid that incipient democracy. Everyone who stepped forward to serve can feel a sense of mission or sense of completion having done that.

Q: You say we abandoned Vietnam at the end.

A: It’s inarguable that the way the war ended was shameful for our country. It was upsetting for me and others who had served there.

Q: Another subject that’s visceral with you is wealth disparity. What can be done?

A: This has grown worse and worse over my adult lifetime. The country is looking at people at the very top moving away from everyone else in a very dramatic and unfortunate way that we have not seen since the 1890s. When you have leadership with the right focus and the right conscience, you can address these issues. But the system is getting more broken, and the optimal way to fix it is to find ways for the average American to participate in the campaign process.

Q: Are you basically hopeful or discouraged about what’s to come for our country?

A: I really am worried about our country. Whether you came here 10 years ago or 300 years ago, people do buy into the American dream, which is: I want to be a success if my talent will allow me to be a success, and I want to see fairness. When we look at those two together right now, we’ve moved so far away from that.

Q: What about the story of veterans?

A: We’re doing a super job with the programs, but you always have the reentry difficulties of those who have been separated from their communities. It’s very easy for people to say, “Thank you for your service.” It’s another thing to turn around and take the risk of hiring, particularly the former enlisted people.

Q: And on the medical side?

A: I was counsel on the full veterans committee, the first Vietnam veteran to serve as a full-committee counsel in Congress. It stunned me that there was a 600,000-case backlog of claims. During my time in the Senate, it became 900,000. One reason was the convergence of Vietnam veterans aging out of their career paths and looking to the VA for medical care and those coming from Iraq and Afghanistan. There is no excuse.

Q: But once you’re in the system?

A: The quality of care is very good.

Q: Do we take good care of our military families?

A: When my father went back into the military in 1947 and was gone for 3-1/2 years, my mother was 24 years old with four kids in a town she didn’t know that well with no military services available, no family services available through the military, and that was the norm. When you look now at the programs and attention that’s paid to the well-being of military families, it’s a great story.