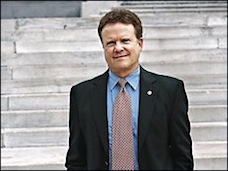 The most disciplined thing I’ve ever done in my life is probably the act of writing a book — and novels are harder than nonfiction. People tend to think, “Oh, novels, you just start writing a story, and, you know, let the muse take you.” But there’s enormous discipline in writing novels. I wrote my first one cover to cover seven times. I wrote, I wrote, I wrote, and then I couldn’t get it published.

When I was on my, like, fifth draft for the book, I was able to get it to a guy named Ted Purdy, a really renowned editor. Anyway, I was sitting here inventing conversations between people who never existed in a room by myself — and Purdy called me and said, “I’m going to work with you on this.” This is a guy who had edited some of the greats, the true greats. And he made me believe. I actually had started working on the Hill as a committee counsel, and he was like: “Don’t do politics. Anybody can do politics. You are a writer!”

When the Reagan administration came in and offered me a job in ’81, I said, “No, I really want to go write again.” So I went out and did some really interesting journalism and wrote [another] novel. Then when the [Marine barracks] blew up in Beirut — I’d been over there as a journalist — I just felt like: I need to stick my oar in the water. It was one of those feelings like you need to come in and try to solve problems rather than simply writing. I came in for four years [at the Pentagon], and then I kind of felt like I’d done what I wanted to do.

This time back [in politics] was very similar in a sense. From 9/11 to Katrina, it was almost the same feeling as when the building blew up in Beirut: I got so frustrated with the direction the country was going. So I just said, All right, I’m going to stick my oar in the water again.

I’d never been involved in a campaign before, really. I was very late. I actually announced nine months to the day before the [2006 Senate] election — with no money. No one around me, whether [my wife] Hong or my son, Jim, none of us really knew what was going to happen. My friend Nelson Jones said, “What are you doing?” He said: “You know what it means to dance with the bear? You start dancing with the bear, you can’t stop dancing till the bear wants to stop dancing.” And that’s really what a campaign is. It was pretty brutal. But you have to see things through.

I’ve never felt more natural than when I’m doing this sort of stuff, when I feel like I’m leading — from the Marine Corps to working on the Hill, to working in the Pentagon, to working in the Senate. But nothing gives me greater pleasure than to write something that I believe is really good. Writing is what I will always do, no matter what. My mind always writes. You never stop writing if you’re a writer.
Interview by KK Ottesen