General and Mrs. Jones, General and Mrs. Haynes, other distinguished military guests, Corporal Williams, PFC Lucas, Petty Officer Wahlen, Colonel Barker, General Livingston, Colonel Barnum, Colonel Vargas — seven recipients of the Congressional Medal of Honor in all, attending the ceremony with us today — fellow Marines, and especially those of you who fought on Iwo Jima. It is an honor and a great privilege to be among you today. 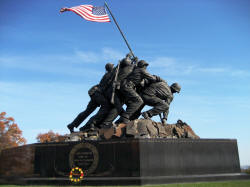 It would be presumptuous of me even to attempt to tell your own story to you, or to try to put into context that which you have already assimilated over the course of the years since February, 1945. I would be uncomfortable even recounting my own visit nearly twenty years ago to that island which so defined your lives. All I saw on Iwo in the quiet of my own February morning were the echoes of your struggle: the black, hot volcanic sand along the beach. The earth cracking and giving up sulfurous fumes. The vegetation clinging to old bunkers. The spent bullet casings here and there, like odd seashells in the sand. And Suribachi, won at such a price, hardly more than a hill, impressive only because of the memories it conveyed.

Only those who were in the middle of any battle can ever fully understand it. For the rest of us, even those who have worn the uniform of Marines, and even those Marines who have felt the sting of battle, Iwo Jima can only be comprehended indirectly. Through the narratives of the survivors. Through the awful statistics of those who did not survive. Through the objectives that were achieved. Through the knowledge of the toughness of the enemy that was defeated. And all of these together, as much as any campaign the Marine Corps has ever pursued, have brought an unrelenting, never-ceasing pride to all of us who have ever claimed the title of United States Marine whenever we have had the honor of shaking the hand of a man who fought on Iwo Jima.

Americans, and particularly Marines, fight for many reasons. We are proud to fight for our country. We are impelled by accountability to our traditions and to those who have gone before us to fight for the honor of our Corps. And we are bound by the sanctity of our very motto, Semper Fidelis, to fight against all odds if necessary on behalf of one another.

There is no need to go into details here in front of this audience, but suffice it to say that at Iwo Jima our country benefited immeasurably. And it is perhaps the greatest tribute to those of your generation that once the war was over, you moved forward and forged strong relationships with our former enemies that provided the foundation of stability in the world today.

Despite the fervent wishes of well-meaning peoples throughout history, wars are inevitable, and since 1945 our Marine Corps has seen its fair share of carnage, particularly in Asia. But our country’s sense of fairness and decency enabled Japan to emerge from its own rubble and become perhaps our most important bilateral partner. We sought no vengeance. We did not fight for territory or for domination. In fact, as you all know, we kept no territories that were won in battle, even returning Iwo Jima itself back to the Japanese. There could be no purer victory, no greater statement of the values of our nation, than to have conducted ourselves in such a manner.

What was given to our Marine Corps at Iwo Jima is equally as enduring. Every man and woman who has served as a United States Marine since February 1945 has carried with him or her the legacy of Iwo Jima. It is woven into their consciousness just as tightly as the fabric that makes up their uniform. The sacrifices made on that battlefield inform them every day of the inalterable standards to which history might make them also accountable. The courage and sense of duty of their fellow Marines on Iwo Jima breathes dignity into their own acts, even 55 years down the road.

And what was given to one another is probably the most profound. Friends are found on the battlefield, and unfortunately friends are also lost. And where do we find the measure of that sacrifice? How can we account for the value of that loss? Sometimes we can find an answer in our sense of country, at other times in our Corps. But clearly we can see it in the lives that were able to continue due to the acts of others who were not so fortunate.

As one example, John Krukar left the steel mills of Pennsylvania for the Marine Corps. He served in the Iceland Brigade, then pulled sea duty during some of the great battles of the North Atlantic. After that he served on Guam, and then, as he liked to put it, he got shanghied into the Fifth Marine Division and served on Iwo Jima. When the war was over, like so many others he took off his pack and went back home to Pennsylvania, where he spent the remainder of his productive years working in a foundry at the Pittsburgh Plate Glass factory in Ford City. John Krukar loved the Marine Corps, with the unique, knowing cynicism of a twice-busted sergeant. He had four kids, three of whom served in our armed forces. One of them is here today. She happens to be my wife.

And within this little microcosm perhaps we can understand the most personal manifestations of duty, honor, and sacrifice. Throughout that horrendous fight, thousands of Marines fell dead or wounded so that others, like John Krukar, might live and carry on. I have a wife whose very life here on earth is the direct product of that courage, and those sacrifices. I have three children who may not fully understand it now, but in time will comprehend that they are forever tied to the brotherhood of Marines who fought on Iwo Jima.

John Krukar was a wild, irascible trade-union Democrat who also happened to be a good friend as well as my father-in-law. He has passed away, and it is hard not to miss him a great deal today. Every year on the anniversary of the Iwo Jima landings I used to call him. What I used to tell him applies equally as well to every man who fought on Iwo Jima. So let me share those thoughts with you today.

First, as the son of an Air Force bomber pilot who if the war had been extended might have needed the use of the airfields built on Iwo Jima, thank you.

Second, as a Marine who benefited from the example you showed and the respect that you brought to my own uniform, thank you.

And third, as an American who loves his country and has a special regard for those who have had the courage and the willingness to risk their lives in order to protect it — thank you. All of you. thank you.

And finally, one last thought. I am told by General Haynes that this may be the last time the combat veterans of Iwo Jima organize a memorial service for us. But I can promise you as a Marine and as an American that this will not be the last time we will organize one for you.