The Novelist Who Put a Human Face on War: A Review of “Catch-22”

It has been more than 30 years since I read “Catch-22,” but when I learned that Joseph Heller had died on Sunday, the book sprang back at me with a startling vividness. Yossarian in the hospital, censoring letters according to his own random formulas. Major Major, promoted because of his name. Milo Mindbender, the cunning soldier turned profiteer who eventually took advantage of both sides’ war weariness by staging an entire battle for a fee. The hilariously inventive schemes to beat the system and come out of the war alive. The quietly tragic moments of death, on the bombing runs and again on the tranquil, protected beaches of their home base when an aircraft goes astray. One can debate many issues regarding the novel and the war it portrayed, but its lasting greatness is beyond dispute.

I actually read the novel twice, with stunningly different impacts.

Shortly after “Catch-22” went into paperback, it moved through my high school near Offutt Air Base, Nebraska like wildfire. We were mostly Air Force brats, born just after World War II, raised on the stories of heroes and legends, many of whom were our own fathers. Our weekly television fare was heavy with the war’s retelling, including such popular series as “Air Power” and “Victory at Sea.”

We were fiercely proud of our fathers and of the role our country had played in the war. And yet the novel captured for us a humanity that was otherwise difficult to penetrate, and through its deliberate absurdity it gave us an understanding of how terrifying it is for anyone — no matter how brave, no matter how good the cause — to repeatedly place himself at the risk in service of a higher ideal.

And in this sense many critics and fellow writers are wrong when they claim that the book’s greatness was that it somehow anticipated wars that followed World War II. Alfred Kazin in his “Bright Book of Life: American Novelists and Storytellers From Hemingway to Mailer,” wrote that Heller’s novel is “really about the Next War, and thus about a war which will be without limits and without meaning, a war that will end when no one is alive to fight it.” But “Catch-22’s” greatest power was that it took the ultimately justifiable war and stripped away can and hypocrisy from the telling of how difficult it is to serve.

Great literature confronts comfortably held notions, and in the aftermath of the bloodletting and tragedies of World War II the national mindset was nothing short of adamant in its insistence on the fatalistic bravado with which our soldiers had faced death — and never mind that two thirds of those who served were draftees. (By contrast, two-thirds of those who serviced in Vietnam were volunteers.)

“Catch-22” laughed happily at this view. Heller’s novelistic choice of absurdity over irony was the most effective way to make a point without demeaning true sacrifice or insulting our national goals. His grand comical imagination took those of use born just after the war behind the newsreels and the stiff remembrances into the minds of individuals being impelled, often against their will, by his historic events.

Heller was telling us that it’s easy to believe in a cause, especially if someone else is dying for it, but that beyond politics and high-blown speeches the human mind is clever, innovative and laced tightly to the genetic code that has allowed our species to survive. It is for this reason, I believe, that the novelist Nelson Algren called “Catch-22” the “best American novel to come out of World War II.

I read “Catch-22” again in June 1969. I was sitting underneath an umbrella-like lean-to I had fashioned out of my Marine Corps poncho to protect me from the 100-degree heat in a windless, treeless, sandy peninsula known as Go Noi Island. We had been drinking bad water for months and I had only recently overcome a case of hookworm. I smelled so bad that when I fell asleep my own body odor woke me up.

In a few weeks I would be wounded and after being picked up by a medevac I would learn that I had dropped more than 30 pounds in four months. Typical of the Marine Corps experience in Vietnam — a war that produced five times as many dead Marines as World War I, three times as many as Korea, and more total Marine casualties than even World War II — my rifle platoon had been frequently chewed up. Two of my original three squad leaders were dead, the other shot through the gut. I was on my third platoon sergeant and my fourth radio operator, who in a few days would be shot, to be replaced by a fifth, who within a few weeks after that would lose an arm.

I had just received a letter from a Naval Academy roommate, posted from his minesweeper’s liberty port in Mallorca It was filled with well-intentioned politics, telling me how important it was that the war go on until we won, then remarking about how nice the Mediterranean was at that time of year, and at the end reminding me that he had been promoted to lieutenant junior grade, three months before I would reach first lieutenant. I found myself wishing I could strangle my roommate, or at least send him out on a long patrol with four canteens of wormy water while I was transported for an evening to Mallorca.

Then I looked across our sun-baked bomb-cratered company perimeter and saw a fellow platoon commander running toward me. He was laughing uncontrollably, waving a book in the air. He crawled underneath my poncho hooch and held the book in front of me, open at a favorite page.

“Read this!” he said, unable to stop laughing. “Read it!”

He handed me “Catch-22.” I found the place his finger had marked and began reading. I was suddenly in the midst of World War II. Yossarian was at a bar, getting drunk, arguing with his fellow airmen about the war. “Who is the enemy?” he was persistently asking them. Of course we knew who the enemy was in World War II. But as with so much in Heller’s masterpiece, Yossarian had a different answer. And for those who must do the fighting in any way,, it rang timeless: “The enemy is anybody who shoots at you. And anybody who sends you out to get shot at.”

In the next few days I devoured the book again. It mattered not to me that Joseph Heller was then protesting the war in which I was fighting, and it matters not a whit to me today. In his book, from that lonely place of blood and misery and disease, I found a soul mate who helped me face the next day and all the days and months that followed. His message was not that his war or mine was either good or bad. It was that all wars dehumanize. That few soldiers march happily to their fate. And that once the bullets start to fly, all battlefields become apolitical. For while there may be few atheists in a foxhole, there are even fewer politicians.

Literature remains the best mechanism to explain such anomalies. And great novels, unlike their authors, live on and on. 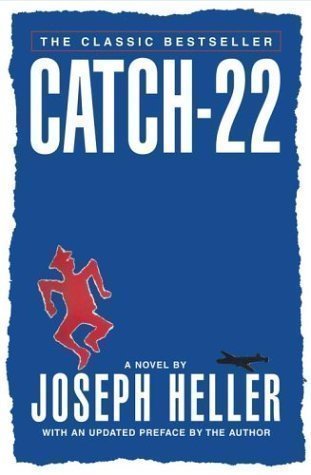