More than 27 million Americans today can trace their lineage to the Scots, whose bloodline was stained by centuries of continuous warfare along the border between England and Scotland, and later in the bitter settlements of England’s Ulster Plantation in Northern Ireland. Between 250,000 and 400,000 Scots-Irish migrated to America in the eighteenth century, traveling in groups of families and bringing with them not only long experience as rebels and outcasts but also unparalleled skills as frontiersmen and guerrilla fighters. Their cultural identity reflected acute individualism, dislike of aristocracy and a military tradition, and, over time, the Scots-Irish defined the attitudes and values of the military, of working class America, and even of the peculiarly populist form of American democracy itself.

Born Fighting is the first book to chronicle the full journey of this remarkable cultural group, and the profound, but unrecognized, role it has played in the shaping of America. Written with the storytelling verve that has earned his works such acclaim as “captivating . . . unforgettable” (the Wall Street Journal on Lost Soliders), Scots-Irishman James Webb, Vietnam combat veteran and former Naval Secretary, traces the history of his people, beginning nearly two thousand years ago at Hadrian’s Wall, when the nation of Scotland was formed north of the Wall through armed conflict in contrast to England’s formation to the south through commerce and trade. Webb recounts the Scots’ odyssey—their clashes with the English in Scotland and then in Ulster, their retreat from one war-ravaged land to another. Through engrossing chronicles of the challenges the Scots-Irish faced, Webb vividly portrays how they developed the qualities that helped settle the American frontier and define the American character.

Born Fighting shows that the Scots-Irish were 40 percent of the Revolutionary War army; they included the pioneers Daniel Boone, Lewis and Clark, Davy Crockett, and Sam Houston; they were the writers Edgar Allan Poe and Mark Twain; and they have given America numerous great military leaders, including Stonewall Jackson, Ulysses S. Grant, Audie Murphy, and George S. Patton, as well as most of the soldiers of the Confederacy (only 5 percent of whom owned slaves, and who fought against what they viewed as an invading army). It illustrates how the Scots-Irish redefined American politics, creating the populist movement and giving the country a dozen presidents, including Andrew Jackson, Teddy Roosevelt, Woodrow Wilson, Ronald Reagan, and Bill Clinton. And it explores how the Scots-Irish culture of isolation, hard luck, stubbornness, and mistrust of the nation’s elite formed and still dominates blue-collar America, the military services, the Bible Belt, and country music.

Both a distinguished work of cultural history and a human drama that speaks straight to the heart of contemporary America, Born Fighting reintroduces America to its most powerful, patriotic, and individualistic cultural group—one too often ignored or taken for granted. 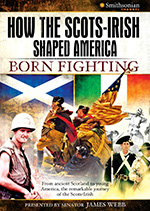 In this landmark two-part series, Senator Jim Webb tells the largely forgotten story of the Scots-Irish, a people whose values, culture and fighting spirit profoundly shaped America. Follow Senator Webb as he tracks their heroes and legends from William Wallace to Andrew Jackson, the first of 17 Scots-Irish U.S. Presidents. Their Bible-thumping, battle-scarred march for independence took them from Scotland to Northern Ireland and finally the open expanses of early America, where they would leave an indelible mark on the national character.

Tom Wolfe: “A BOMBSHELL, or else the most brilliant battle flare ever launched by a book. James Webb reveals the all-but-invisible ethnic group that has created the core beliefs of democracy American style: our rights come from God, not the Government; all of us are born equal, and ‘born aristocrats’ don’t exist… He has written not only an engrossing story but also an important work of sociological history…”

The Houston Chronicle: “James Webb has written what may be the first of its kind: a scholarly book that polishes the tarnished image of America’s bubbas and rednecks… provocative.”

Kirkus Reviews: “Pugnacious, bibulous, pious: the Scots-Irish have fueled stereotypes and filled the White House, to say nothing of the ranks of the military … Webb does a fine job of tracing the Scots-Irish from antiquity to the American Revolution…”

Booklist: “In telling the story of the Scots-Irish in America as a robust and passionate tale, novelist Webb writes straightforward, no-nonsense, readable history that clips right along while it is also very personal and highly idiosyncratic about a people who, he claims, are largely invisible–taken for granted–to the general public and who, seldom thinking of themselves in ethnic identity terms, mostly don’t know their culture. Webb maintains that Scots-Irish attitudes form the bedrock of American society, especially among the working class. Scots-Irish culture has produced American presidents from Andrew Jackson to Bill Clinton, soldiers from Ulysses S. Grant to George Patton, pioneers, preachers, and others whose most common characteristics may be described as fierce individualism, persistent egalitarianism, and a strong sense of personal honor. Perhaps the most visible examples of broad and ongoing Scots-Irish legacy are the fundamentalist Christianity (a potent combination of Scottish Calvinism and headstrong populism) of America’s Bible Belt and country music. Webb begins the Scots-Irish saga in Scotland, where, he says, the Scots-Irish character was formed, moves on to the Ulster Scots of what is now Northern Ireland, and follows them to the Appalachians and points beyond as well as through the American Revolution, the Civil War, and up to the present day. Popular history at its finest.