Webb Reviews: Night Draws Near – Iraq’s People in the Shadow of America’s War

The 2003 invasion of Iraq and its consequences owe more to the insistent saber-rattling of the removed, intellectual classes than any other war in American history. That so many leaders and commentators now coldly politicize what is, at bottom, a visceral and powerfully emotional experience for those on the receiving end of our invasion has magnified the inability of many Americans to understand the differences between the Bush administration’s aspirations and Iraq’s realities. It also has depersonalized the Iraqi people in many eyes and fed the irony of the rhetoric from those who claim that Iraqi resistance is driven simply by the fear and hatred of the “freedom” America has brought them. The U.S. leadership views the attempt to overhaul Iraq as power politics, designed to remake an entire region. Most Iraqis, by contrast, measure the invasion and occupation through its impact on diverse cultural forces, strongly held local traditions and a long history of other invasions and occupations.

Enter Anthony Shadid, a Washington Post reporter whose book Night Draws Near gives us — perhaps for the first time — a clear understanding of how and why the Iraqi people have reacted to the American invasion and occupation of their country.

An Oklahoma-born American of Lebanese descent, Shadid has already earned a slew of journalistic awards for his work in Iraq, including the 2004 Pulitzer Prize for international reporting. Indeed, one strains to think of any other person who would be able to combine the same elements of ethnic background, American upbringing, scholarly ability and long experience in the region in order to flesh out the cultural, historical and political framework of the Iraq war.

Reporting with great freedom of movement and without being embedded in a U.S. military unit, Shadid covered the entire period from before the invasion to events following Iraq’s January elections. The Arabic-speaking Shadid walks us through Iraq, giving us a set of eyes with which to gauge the country for ourselves. Some of this is “grunt reporting,” where Shadid witnesses many of the country’s more gruesome catastrophes, both during and after the initial fighting that toppled the Baath regime. Much of the book is almost novelistic; he introduces Iraqis of widely varying beliefs and backgrounds, revisiting many of them several times from the American invasion to the period following the 2004 battles in Najaf and Fallujah, thus allowing us to see experience through their eyes. Now and then, we are treated to historical essays that provide a vital backdrop to understanding just how the Iraqis view the Americans — and, indeed, each other. In high journalistic fashion, rarely does Shadid cross the line between reporting and personal opinion, especially political opinion.

Throughout all of this, one gets a sense that Shadid, perhaps uniquely among American journalists, knows how to operate in that difficult and often dangerous environment. His Arab background and mastery of the language no doubt helped him move about and get Iraqis to talk openly. His affection for the region and its people is palpable. And in addition, he navigated many intricacies with the help of his erstwhile Iraqi government handler, whom Shadid decided to retain as a trusted employee after Saddam Hussein’s fall. The two became great friends. One wonders what might have happened if American authorities had taken such an approach after the invasion, cultivating the best and brightest from among the old regime rather than banishing Baath Party members from further government service.

Several themes resonate throughout the book, many of which should give pause to adherents of the narrow political orthodoxy that seems to define so much of the U.S. debate and analysis of Iraq. American commentators often begin their discussions with the premise that the Baath era was a uniquely monstrous period in Iraqi history. Few Iraqis look back to that period with fondness, but as time passes, many of them lament the loss of order that came with the dictatorship, in contrast to the murderous chaos that defines the occupation.

Indeed, few Americans grasp how deeply Iraqis feel their own history, or how fiercely they have always resisted foreign occupation. “The last four centuries were hell,” one burly, aging Iraqi academic says to Shadid. “Despotic, tyrannical, bloody regimes, and most of them were foreign.” We learn that President Bush’s promise that the U.S. military would arrive in Iraq not as conquerors but as liberators was virtually identical to the words British Maj. Gen. Sir Stanley Maude used in 1917 (“Our armies do not come into your cities and lands as conquerors or enemies, but as liberators”), when Britain began a decades-long occupation during World War I, defeated the Ottoman Turks and took control of Iraq’s oil. “It’s a long story, the history of Iraq,” a Baghdad restaurateur told Shadid, without apparent irony.

Not surprisingly, Shadid shows us a U.S. administration that has locked itself away from the violence and frequent hostility that rumble outside the “palm-shrouded, formerly manicured villas and palaces” of what has come to be known as the Green Zone. The Coalition Provisional Authority’s largely Republican and painfully inexperienced staff was “drawn from the ranks of Washington lobbyists, congressional staffers, policy enthusiasts and the public-relations specialists less charitably known as flaks,” Shadid notes. “Most of the staffers so rarely emerged from the [Green Zone] . . . that they had no notion of what was going on in the country they were supposed to rule. . . . The Green Zone was truly a world unto itself.”

Shadid breaks new ground in offering us a much-needed look at the human face of the Iraqi people, as well as an acute analysis of the variegated cultural and historical forces that ultimately are going to decide the political fate of Iraq. In one gruesome but illuminating scene, we see a father being forced by angry fellow villagers to kill his own son, who had turned into an informer for the Americans, lest failure to do so set off years of “blood-soaked vendettas.” Whatever an American politician may wish to make of this event, it graphically debunks the notion that resistance to the American occupation has been merely the work of “dead-enders” or “foreign terrorists.” As Shadid points out, in Sunni regions “tribal authority had grown in the wake of the government’s fall . . . tribal code stipulated a brutal frontier justice, which had come to fill a lawless void. This code, rigorous and unforgiving, was paramount.”

Indeed, through Shadid’s eyes, we see clearly the chasm between occupier and occupied — a rift that runs far deeper than the usual ethnic divisions between Shiites, Sunnis and Kurds that dominate U.S. debates about the country’s future. “The Americans in Baghdad framed the tumult in Iraq from the perspective of their own heritage and expressed them in the familiar vocabulary of democratic ideals,” he writes. “They had come as liberators.” But the Iraqis’ own “vocabulary was shaped less by a reflexive celebration of democracy and freedom and more by their own religion, nationalism, and material circumstance.” For Iraqis, “justice” trumps “freedom.” Most important, for Shadid’s interlocutors, legitimacy is the key to future Iraqi politics, pitting the Americans’ Westernized constitutional scheme against less formal structures based on religion and tribal leadership. “The Americans never understood the question; Iraqis never agreed on the answer,” Shadid writes. “Who had the right to rule? As important to Iraqis was the question of where that right came from — God, the gun, money, law, tradition?” Visiting Fallujah, he surveyed “the virtual incomprehension between ruler and ruled, staring across a religious divide.” The custodian of a local mosque told him, “We don’t accept humiliation and we don’t accept colonialism.” A teacher added, “We’ve exchanged a tyrant for an occupier.”

In analyzing the ethnic debate, Shadid gives us historical and cultural insights that often differ with prevailing views. While most political analysts tend to lump Iraqis together as Shiites, Sunnis or Kurds, his careful examination of the differences between the Shiite factions led by the upstart cleric Moqtada Sadr and the country’s most important political figure, Grand Ayatollah Ali Sistani, is essential reading. And while the American political and military focus over the past two years has been the defeat of the Sunni-dominated insurgency, Shadid is one of the few writers to show the almost unbelievable strategic mousetrap playing itself out as the Shiites — less secular and more susceptible to the influence of Iran — step ever closer to the prize of national dominance.

Mixed in with such fresh, hard-won insights are passages that combine acute reporting skills and novelistic phrasing, giving the reader a true sense of people and place. During the battle for Baghdad, Shadid noticed “the buses that still, spectacularly, ran their routes, even during the most pitched fighting on the capital’s streets.” And after a gruesome bombing in Najaf that killed more than 80 people near a Shiite shrine, “the wood stalls lay splintered in blackened pools of grime and blood mixed with charred metal and brick. Along one sidewalk, men sifted with their hands through shards of glass for silver rings blown from their display cases.”

Night Draws Near has only two weaknesses. The first is that its reporting on the Kurds is not as comprehensive as its treatment of other groups. The second is unavoidable: The book lacks a retrospective that would sum up the entirety of this chapter in Iraqi history, for the simple reason that the situation continues to evolve so unpredictably. But as a piece of reporting on the forces that are shaping today’s Iraq, this is as fine a book as one could hope to read. 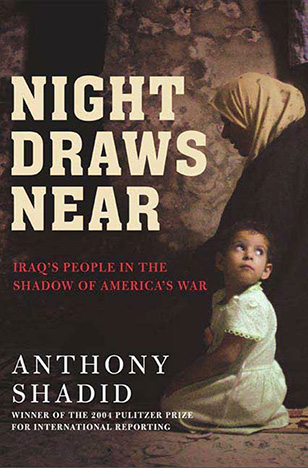