Webb Reviews: The New American Militarism: How Americans are Seduced by War

History, as T.S. Eliot wrote, “has many cunning passages, contrived corridors and issues, deceives with whispering ambitions, guides us by vanities.” And the great poet certainly would be having fun if he were alive today, watching the absolutely unbelievable shifts in alliances and rhetoric that have marked recent debates over American foreign policy.

As the Vietnam War was winding down, few could have imagined how the deck chairs on the good ship America would be so re-arranged in the space of one generation. The thoroughly discredited Truman doctrine of interventionism has been re-hatched, pumped full of steroids, and sold to the American people as the Bush doctrine of pre-emptive war. Many of the same personalities who used protests against the Vietnam War as a device to decimate the entire American system (David Horowitz comes immediately to mind) now claim that even questioning the logic of the Iraq War is, in effect, treason.

A years-long media onslaught that brought down Presidents, uncovering even the most minute government irregularity, has been replaced by celebrity journalism where the watchdogs of government have turned into eager puppies, with one thriving news channel functioning as little more than the ruling party’s ministry of propaganda. The direct intellectual descendants of the civilian think-tankers who so misjudged Vietnam’s battlefield strategy took us to war in Iraq by propounding their own false optimism.

On the other side Vietnam’s Great Divide, the most intelligent warnings about the downside of an elective war against a nation that was not directly threatening us came from long-serving military officers rather than the rabble-rousing Left. And America’s military men and women have ascended from the role of national scapegoats to that of revered cultural heroes.

Andrew Bacevich in his book The New American Militarism (Oxford, 261pp.) gives us an excellent first attempt to explain how these turns of events interrelate. Bacevich brings the right balance of qualifications to such an analysis. A West Pointer who served in Vietnam and then earned a doctorate in history from Princeton, he now directs the Center for International Relations at Boston University.

Like many who know war first-hand and spent their young years studying the history of the use of military power, the author was a cautionary voice against the invasion of Iraq. In an explanatory preface he details his own intellectual journey from an early affiliation with the neoconservative movement to concern about its methods and its aims, and finally to a view that the American political system has become “fundamentally corrupt,” both ends of the political spectrum having become obsessed with power for its own sake. This corruption, he writes, is accentuated by an historic transition, with the power to make war forfeited to the Executive branch of government at the same time the Presidency has been both “militarized” and compromised by Machiavellian forces. Thus, much of the American system has become a sham, and in the foreign policy arena dedicated to ever-more-frequent war – “it is the mainstream itself, the professional liberals and the professional conservatives, who define the problem (italics his). Two parties monopolize and, as if by prior agreement, trivialize national politics.”

In easily readable chapters, Bacevich breaks apart the components that he asserts are feeding this new national militarism – a changing Presidency whose emphasis in international affairs is focusing too heavily on the use of military force; a military profession which in its struggle to adapt to post-Vietnam realities “made militarism possible, and has “ended up paying much of the price;” the emergence, ruthlessness, and eventual foreign policy dominance of a small group of neoconservative intellectuals; the societal impact of Hollywood; the hardening of the conservative Christian community, which provides a “presumptive moral palatability” to American militarism; the transition of American strategic development following World War II, away from the military and into the hands of scientists who regularly fail to comprehend war’s human dimensions; and an oversized emphasis on the Middle East, coupled with relentless efforts at the second tier of government, which has dangerously “converted the Persian Gulf into the epicenter of American grand strategy.”

Running through these pages is the first overt articulation of a confrontation that has slowly been gathering steam for more than ten years. This confrontation goes to the core of the American experience. One side is represented heavily by those with a classical training in America’s past wars (and frequently with experience in having fought them), who would send American forces into harm’s way only if the nation is directly threatened. The other side is dominated by a group of theorists, most of whom have never seen the inside of a military uniform, who adhere to an essentially Trotskyite notion that America should be exporting its ideology around the world at the point of a gun.

The nexus of this battle includes issues such as who should serve in time of war, and the conditions under which the nation should actually decide to use military force, both of which have surfaced with renewed vigor as the Iraq War lengthens. But the key focus of this debate is further in the shadows, rarely emerging in the superficial coverage of the war or the congressional hearings that usually address such surface issues as funding or the inevitable scandal of the week. That focus regards who should determine America’s strategic interests, in the process impelling the nation forward in terms of its economy, its international relationships, and ultimately when, where, why, for how long, and under whose authority it will commit its military on foreign soil.

The most illuminating chapters in The New American Militarism reflect the author’s unease with the theorists who at present control these issues. His chapter on the neoconservative movement is admirable for its lack of rancor and for its analysis of the slash and burn political tactics this small group of influential intellectuals has brought to the national forum. It is chilling to read the rhetoric of this movement’s intellectual stars – Charles Krauthammer intoning “power is its own reward,” Michael Ledeen claiming “peace in this world only follows victory in war,” and the author concluding that “for neoconservatives like [Robert] Kagan, the purpose of the Defense Department was no longer to defend the United States or to deter would-be aggressors but to transform the international order by transforming its constituent parts.”

The chapter regarding the takeover of military strategy by academic theorists following World War II will help thinking Americans comprehend an area of national policy that is rarely discussed or debated. Of particular interest are the author’s paragraphs on the scientific brilliance – and military ignorance – of the oft- revered Albert Wohlstetter, who served as a tutor and intellectual godfather to several of those who conceived the present strategy for the use of force in Iraq and other Middle East nations.

There are uneven sections in the book. While the author correctly outlines both the power of the Christian Right and its ability to provide moral cover for the continuous use of force, he misperceives the history and motivations of the Christian Right by characterizing them in religious rather than ethnic terms, and thus mislabels the movement as having been anti-military in the past. Actually this movement – as opposed to other Protestant sects who have indeed been anti-military – is centered in the Scots-Irish culture, which is the most pro-military ethnic group in the country. Billy Graham, Pat Robertson, and Jerry Falwell, are all reportedly descended from the Scots-Irish migration. This group also is the most heavily pro-Israel section of America other than in the Jewish community itself, based on its own view of religious doctrine.

The author also holds a deeply felt, and in some cases wrongly placed, opprobrium for President Ronald Reagan. At the outset, he characterizes Reagan as “[Woodrow] Wilson’s truest disciple,” then contradicts himself later, indicating that Reagan was too timid for the “Wilsonian” neo-conservatives. The neoconservatives did “infiltrate” the Reagan administration and frequently threw its foreign policy into contradictory disarray. But it would be wrong to disassociate many of Reagan’s personal decisions from his determination to face down Soviet expansion in places like Afghanistan. And it should be remembered that the ill-fated military mission in Beirut did not involve the unilateral use of American force, but rather the injection of military units from Britain, France, Italy and the United States, whose mission was to help separate different factions after Israel’s 1982 invasion of that country.

With respect to the American military, the author characterizes the Cold War from an Army-centric perspective, focusing on the ground threat in central Europe. In reality, the gravest real threat from the Soviet Union – now being replicated by an expansionist China – was from the growth of its Naval forces, particularly in the tinderbox of northeast Asia. The author also lays the blame for the military’s loss of credibility with its civilian counterparts as being derived heavily from the actions of Colin Powell and Wesley Clark. He does well to focus on the sometimes-uncomfortable legacies of these two officers, but the military’s difficulties with its civilian counterparts has a far more complex history – in many cases running directly to the takeover of American strategic formulation following World War II, which Mr. Bacevich himself describes so lucidly.

In sum, it will not be surprising if those now in power, and their intellectual patrons, attempt to ignore this book. The rest of us should make sure to read it. 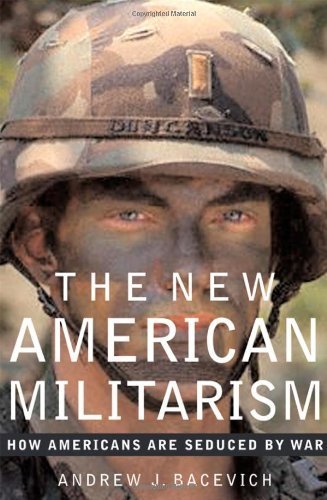