What We Can Learn From Japanese Prisons

Fuchu Prison, near Tokyo is home to 2500 of Japan’s most hardened criminals. Ed Arnett is an alumnus who thinks of Fuchu daily. The dank, unheated buildings, the harshness of the guards’ reports to their superiors, the high stone walls—these are as near to him as the scars on his legs, from the frostbite he picked up in his Fuchu cell.

“I didn’t know I could still cry until I went to prison in Japan,” says Arnett, convicted in 1979 for possession of two kilograms of marijuana. “I wouldn’t put that experience on anybody.”

Arrested on Okinawa, Arnett was kept in pre-trial confinement for a month. He endured days of intense interrogation without an attorney and signed a confession–written in Japanese – that he could not read. He met his lawyer for the first time at his trial. The trial took 30 minutes. He was not allowed a jury.

At Fuchu, Arnett lived in a 9-by-5-foot cell furnished with a hard, narrow bed, a sink that also was his desk and a toilet that he could flush only when permitted by the guards. His mail was censored, and he was not allowed writing materials. The books he read were the few approved by his guards. Gifts from home were kept from him until his release. Despite his diabetes, Arnett’s diet was dominated by seaweed, fish and rice. He lost 55 pounds in 18 months. Fourteen of those months were spent in solitary, in a room where a camera recorded his every move. His scalp was shaved every two weeks. He was forbidden to look out the window or to communicate with other inmates. He worked eight hours a day, even in solitary, making paper bags in his cell. He could not touch his bunk during the day, but when the lights went out at night, if he was not lying down, he was punished. On his release, due to improper treatment of his diabetes, a doctor called him “a walking dead man.”

Arnett’s experiences were not unusual for Japanese prison inmates, about 100 of whom at any time are Americans serving sentences for crimes ranging from minor drug offenses to murder. But, surprisingly, Arnett, home in Omaha, Neb., says he prefers Japan’s legal system to ours. Why? “Because it’s fair,” he says. “They never tried to trick me, even in interrogation. They were always trustworthy. I could have got five years and they gave me two. The Americans who were helping them wanted me to get 20. The guards at Fuchu were hard, but they never messed with you unless there was a reason. You didn’t have to worry about the other prisoners coming after you, either. And the laws of Japan are for everybody. That’s the main thing. The laws in this country depend on how much you can pay. I’d rather live under a hard system that’s fair.” 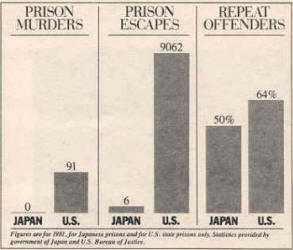 A defendant’s lack of counsel during interrogation and the absence of a jury trial, a U.S. Constitutional right, raises no hackles. “There are scholars who criticize this, but they have no social or political support,” notes Kotaro Ohno of Japan’s Ministry of Justice, who studied law at Harvard. “A Japanese believes the judge is more knowledgeable about his situation than a collection of citizens.” Ohno defends Japan’s very narrow use of the exclusionary rule and says the U.S. “goes too far” in excluding illegally obtained evidence.

Japan has a low crime rate without either a police state or excessive litigation. Only 50,000 prisoners, including pretrial detention inmates, are presently con- fined in Japan, and fewer than 4 percent of the prisoners are sentenced for longer than three years. In the U.S., there are 580,000 adult inmates, and 80 percent of those in state institutions have been sentenced for longer than five years.

Observes Yoshio Suzuki, until recently director general of the Correction Bureau in Japan’s Ministry of Justice: “The law in Japan is severe in the attitude toward offenders as a whole. This allows it to be lenient in the punishment of an individual. We involve the victim in the criminal process. If the accused has shown proper penance to the victim through repayment or an expression of grief and the victim tells this to the court, it will go much easier on the accused.”

Japan brings 70 percent of its crimes to conviction. The U.S. brings only 19.8 percent of its crimes to arrest. But the contrast in prisons themselves is most startling. Americans familiar with the horrors of Attica and New Mexico and the routine tales of brutality and homosexual rape would find the orderly corridors of a Japanese prison mind-boggling.

“They don’t coddle them, but they don’t abuse them, either,” says U.S. Navy Capt. Everette Stumbaugh, a lawyer for the commander of U.S. forces in Japan. “Japan plays it aboveboard all the way.”

There never has been a hostage crisis in a Japanese prison. There has been only one “prison disturbance” – 30 years ago. There never has been a reported case of homosexual rape, or of prisoner gang wars. No guard ever has been killed by inmates; there has been only one inmate death in the last 10 years at the hands of another. There have been only 35 escapes from Japanese prisons in the last seven years (the U.S. average is more than 8,000 escapes a year). Almost 94 percent of Japan’s prisoners perform labor that is geared to their aptitude and rehabilitative potential, rather than based on the crime committed. Guards typically are unarmed. There are 58 major prisons in Japan. In addition to Fuchu, I toured prisons in Yokosuka and Okinawa. Only Fuchu had armed guards. There, fewer than 10 percent carry weapons-police sticks.

“What about the guard in the tower?” I asked Kaoru Kayaba, Yokosuka’s warden, as I stared at the juncture of two walls on the far side of a large athletic field. “Doesn’t he carry a rifle?”

Kayaba smiled. “We don’t keep a guard in the tower. Except when the prisoners play softball.”

“In case a prisoner vaults the wall?”

“In case a ball goes over the wall.”

Much of the success of Japan’s prisons is due to certificates in trades such as plastering and auto repair. The “B”s-many of whom are members of the Yakuza, Japan’s Mafia-might do such mundane tasks as maintenance work or making toys.

Prison officials are highly trained. Last year, though two-thirds of those who passed the national qualifying test for prison guards were university graduates, only one-fourth were hired. Successful applicants must spend two weeks as observers in a prison and then complete eight months of intense training before they may begin to work. Guards are transferred every few years to promote standardization within the system.

All Japanese wardens began as guards. Their experiences have given them both “hands on” time with prisoners and philosophical depth. Yokosuka’s Warden Kayaba affirms the good of man. “All human beings are 98 percent good and 2 percent bad,” he says. “The men who end up in prison are not more evil than others in our society. They are weaker. With the proper education, we can make even the worst offenders as calm as the others.” Guards do this not through force, but through intense counseling and physical denial. A difficult prisoner is removed from the collective environment and placed in an even more austere “punishment cell,” where counseling continues. “We make them think,” says Kayaba. “We talk to them again and again about why they were sent to prison, until gradually they understand.”

“We are their caretakers, not their oppressors,” says Fuchu ‘s present warden, Kiyoshi Taru, of Japan’s most hardened criminals. An aircraft gunner during World War II, Tam saw the corrections field as a way to continue serving his country after Japan’s military was disbanded. “Criminals have violated the well-being of others in order to satisfy their greed,” says Tam. “We teach them how to control their desires and still satisfy themselves. You cannot do this unless you are unimpeachable yourself. We use our example as the instrument for their rehabilitation.”

Tam says all guards are martial arts experts but adds, “If a guard unfairly strikes a prisoner, he will himself be imprisoned for a mandatory seven-year sentence.”

Okinawa’s warden, Yoshitaka Myojin, followed his father into the field. He says the key to prison stability lies in the workshop: “The guard who runs the workshop performs three functions – instructor, disciplinarian and counselor – so the prisoner does not direct his anger toward the guard purely as an authority figure. The guard is part of the overall unit, the father figure.” Noting with irony that many fundamentals of the Japanese system were adapted from the U.S. system, Myojin wonders, “What has happened in America?” 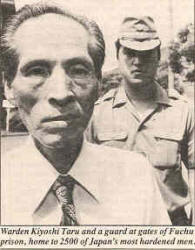 His question is echoed by many here. If the U.S. incarceration rate is one of the highest in the free world, so is its crime rate. Overcrowding-our prison population has expanded by 30 percent in the last three years-contributes to abuse and acts of violence. So does idleness. Few prisoners work in the U.S. jails because of trade – union pressure and “state use” laws that forbid their making competitive products. Only about 10 percent of the inmates in our state systems are allowed to work.

Our guards are often unskilled and untrained. Robert Fosen, director of the commission on Accreditation for Corrections, indicates that the “recommended levels of training” that his group recently set for U.S. prisons consist of a mere 40 hours of “orientation training,” followed during the guard’s first year by 120 hours of further training in supervision and the use of force. He notes that standards had to rise “in well over half the states” to meet these new requirements.

Could we adopt parts of the Japanese system? I asked three Americans of markedly differing political views and responsibilities: Norman Carlson, director of the Federal Bureau of Prisons since 1970, who inspected the Japanese system in 1971; Fosen, who was a New York prison official during the Attica riots; and Edward Koren, an attorney for the American Civil Liberties Union’s National Prison Project.

All three support more inmates working, and Carlson and Fosen favor a decrease in the length of sentences for nonviolent, non dangerous offenders but longer sentences for others.

Their greatest resistance to the Japanese system concerns individual treatment. Says Koren: “No heat in a prisoner’s cell is outrageous. That would be a clear violation of the Constitution’s prohibition against cruel and unusual punishment. The other living conditions are quite extreme. The denial of reading materials without clearly showing they are a threat to prison order, the withholding of writing materials from in- mates and the censorship of correspondence all violate the First Amendment.”

Koren says of Japanese trial procedure: “The exclusionary rule is our way of enforcing Constitutional rights. Involving the victim before a person is convicted should be done only at the defendant’s initiative, Eliminating plea bargaining would be impractical.”

But is the present U.S. way fair?

I told this to Toyofumi Yoshinaga, a legal assistant at the Corrections Bureau in Tokyo who had spent several hours providing me with statistics. His eyes lit up. Said Yoshinaga: “During the great Kanto earthquake of 1923, the walls of one of our prisons did fall down.” He smiled, “No one escaped.”