Remarks at the Confederate Memorial 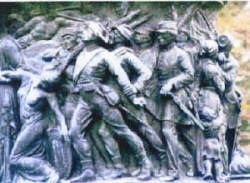 This is by no means my first visit to this spot.

The Confederate Memorial has had a special place in my life for many years. During the bitter turbulence of the early and mid-1970’s I used to come here quite often. I had recently left the Marine Corps and was struggling to come to grips with my service in Vietnam, and with the misperceptions that seemed rampant about the people with whom I had served and what, exactly, we had attempted to accomplish. And there were many, many times that I found myself drawn to this deeply inspiring memorial, to contemplate the sacrifices of others, several of whom were my ancestors, whose enormous suffering and collective gallantry are to this day still misunderstood by most Americans.

I used to walk the perimeter of this monument, itself designed by a man who had fought for the Confederacy and who, despite international fame as a sculptor, decided to be buried beneath it; and I would comprehend that worldwide praise can never substitute for loyalties learned and tested under the tribulations of the battlefield. I would study the inscription:
“NOT FOR FAME OR REWARD, NOT FOR PLACE OR FOR RANK, NOT LURED BY AMBITION OR GOADED BY NECESSITY,
BUT IN SIMPLE OBEDIENCE TO DUTY AS THEY UNDERSTOOD IT, THESE MEN SUFFERED ALL, SACRIFICED ALL, DARED ALL, AND DIED”

Words written by a Confederate veteran who had later become a minister, and knew that this simple sentence spoke for all soldiers in all wars, men who must always trust their lives to the judgment of their leaders, and whose bond thus goes to individuals rather than to stark ideology, and who, at the end of the day that is their lives, desire more than anything to sleep with the satisfaction that when all the rhetoric was stripped away, they had fulfilled their duty — as they understood it. To their community. To their nation. To their individual consciences. To their family. And to their progeny, who in the end must not only judge their acts, but be judged as their inheritors.

And so I am here with you today, to remember. And to honor an army that rose like a sudden wind out of the little towns and scattered farms of a yet unconquered wilderness. That drew 750,000 soldiers from a population base of only five million — less than the current population of Virginia alone. That fought with squirrel rifles and cold steel against a much larger and more modern force. That saw 60 percent of its soldiers become casualties, some 256,000 of them dead. That gave every ounce of courage and loyalty to a leadership it trusted and respected, and then laid down its arms in an instant when that leadership decided that enough was enough. That returned to a devastated land and a military occupation. That endured the bitter humiliation of Reconstruction and an economic alienation from the rest of this nation which continued for fully a century, affecting white and black alike.

I am not here to apologize for why they fought, although modern historians might contemplate that there truly were different perceptions in the North and South about those reasons, and that most Southern soldiers viewed the driving issue to be sovereignty rather than slavery. In 1860 fewer than five percent of the people in the South owned slaves, and fewer than twenty percent were involved with slavery in any capacity. Love of the Union was palpably stronger in the South than in the North before the war — just as overt patriotism is today — but it was tempered by a strong belief that state sovereignty existed prior to the Constitution, and that it had never been surrendered. Nor had Abraham Lincoln ended slavery in Kentucky and Missouri when those border states did not secede. Perhaps all of us might re-read the writings of Alexander Stephens, a brilliant attorney who opposed secession but then became Vice President of the Confederacy, making a convincing legal argument that the constitutional compact was terminable. And who wryly commented at the outset of the war that “the North today presents the spectacle of a free people having gone to war to make freemen of slaves, while all they have as yet attained is to make slaves of themselves.”

Four years and six hundred thousand dead men later the twin issues of sovereignty and slavery were resolved. A hundred years after that, the bitterness had vented itself to the point that we can fairly say the emotional scars have healed. We are a stronger, more diverse, and genuinely free nation. We are also a different people. As we gather here to commemorate the most turbulent crisis our country has ever undergone, it’s interesting to note that a majority of those now in this country are descended from immigrants who arrived after the war was fought.

And so those of us who carry in our veins the living legacy of those times have also inherited a special burden. These men, like all soldiers, made painful choices and often paid for their loyalty with their lives. It is up to us to ensure that this ever-changing nation remembers the complexity of the issues they faced, and the incredible conditions under which they performed their duty, as they understood it.

I’m pleased that many friends and members of my own family are here with me today, including my wife, whose family was in Eastern Europe during the War between the States but who herself served in Vietnam and whose father fought on Iwo Jima. And I would also like to say a special thanks to my good friend Nelson Jones for sharing this day with us. Nelson is a fellow Marine, a fellow alumnus of both the Naval Academy and the Georgetown Law Center, and like so many others here a child of the South. The last twenty five years in this country have shown again and again that, despite the regrettable and well-publicized turmoil of the Civil Rights years, those Americans of African ancestry are the people with whom our history in this country most closely intertwines, whose struggles in an odd but compelling way most resemble our own, and whose rights as full citizens we above all should celebrate and insist upon.

But more than anything else, I am compelled today to remember a number of ancestors who lie in graves far away from Arlington. Two died fighting for the Confederacy — one in Virginia and the other in a prisoner camp in Illinois, after having been captured in Tennessee. Another served three years in the Virginia cavalry and survived, naming the next child to spring from his loins Robert E. Lee Webb, a name that my grandfather also held and which has passed along in bits and pieces through many others, such as my cousin, Roger Lee Webb, present today, and my son, James Robert, also present. And another, who fought for the Arkansas infantry and then the Tennessee Cavalry under Nathan Bedford Forrest. And, to be fully ecumenical, another, who had moved from Tennessee to Kentucky in the 1850’s, and who fought well and hard as an infantry Sergeant in the Union army.

We often are inclined to speak in grand terms of the human cost of war, but seldom do we take the time to view it in an understandable microcosm. Today I would like to offer one: The “Davis Rifles” of the 37th Regiment, Virginia infantry, who served under Stonewall Jackson. One of my ancestors, William John Jewell, served in this regiment, which was drawn from Scott, Lee, Russell and Washington counties in the southwest corner of the state. The mountaineers were not slaveholders. Many of them were not even property owners. Few of them had a desire to leave the Union. But when Virginia seceded, the mountaineers followed Robert E. Lee into the Confederate Army.

1,490 men volunteered to join the 37th regiment. By the end of the war, 39 were left. Company D, which was drawn from Scott County, began with 112 men. The records of eight of these cannot be found. Five others deserted over the years, taking the oath of allegiance to the Union. Two were transferred to other units. Of the 97 remaining men, 29 were killed, 48 were wounded, 11 were discharged due to disease, and 31 were captured by the enemy on the battlefield, becoming prisoners of war. If you add those numbers up they come to more than 97, because many of those taken prisoner were already wounded, and a few were wounded more than once, including William Jewell, who was wounded at Cedar Mountain on August 9, 1862, wounded again at Sharpsburg (Antietam) on September 17, 1862, and finally killed in action at Chancellorsville on May 3, 1863.

The end result of all this was that, of the 39 men who stood in the ranks of the 37th Regiment when General Lee surrendered at Appomattox, none belonged to Company D, which had no soldiers left.

The Davis Rifles were not unique in this fate. Such tragedies were played out across the landscape of the South. To my knowledge, no modern army has exceeded the percentage of losses the Confederate army endured, and only the Scottish regiments in World War I, and the Germans in World War II, come close. A generation of young men was destroyed. One is reminded of the inscriptions so often present on the graves of that era: “How many dreams died here?”

There are at least two lessons for us to take away from such a day of remembrance. The first is one our leaders should carry next to their breasts, and contemplate every time they face a crisis, however small, which puts our military at risk. It should echo in their consciences from the power of a million graves. It is simply this: You hold our soldiers’ lives in sacred trust. When a citizen has sworn to obey you, and follow your judgment, and walk onto a battlefield to defend the interests you define as worthy of his blood, do not abuse that awesome power through careless policy, unclear objectives, or inflexible leadership.

The second lesson regards those who have taken such an oath, and who have honored the judgment of their leaders, often at great cost. Intellectual analyses of national policy are subject to constant re-evaluation by historians as the decades roll by, but duty is a constant, frozen in the context of the moment it was performed. Duty is action, taken after listening to one’s leaders, and weighing risk and fear against the powerful draw of obligation to family, community, nation, and the unknown future.

We, the progeny who live in that future, were among the intended beneficiaries of those frightful decisions made so long ago. As such, we are also the caretakers of the memory, and the reputation, of those who performed their duty — as they understood it — under circumstances too difficult for us ever to fully comprehend.