Senator Jim Webb (D-VA) will be honored this evening with the “Marine for Life” award, presented annually to “an individual who has personified distinguished service to the nation driven by moral and ethical values that are the pride and strength of the United States Marine Corps.”

The award will be presented to Senator Webb, who began his government service with the Marine Corps infantry in Vietnam and most recently authored the Post-9/11 GI Bill, at the annual U.S. Marine Corps Birthday Gala in New York City celebrating the Corps’233rd birthday. Past recipients include General Jim Jones, former supreme allied commander of NATO, and Commissioner of the New York Police Department (NYPD), Ray Kelly.

“There is no person who deserves and embodies this award more than Jim Webb,” said Gerry Byrne, senior vice president of Nielsen Business Media, combat Marine in Vietnam, and co-chairman of the Marine Corps Gala.

“The Marine for Life award was created seven years ago to honor an individual who personifies the ethics, integrity, and substance of the Marine Corps. Senator Webb’s lifelong commitment to our nation’s armed services and his illustrious public and private life personify all that this award represents,” said Byrne.

Senator Webb’s involvement with the Marine Corps has transcended his entire adult life. After graduating from the Naval Academy he stood first among 243 Marines in the demanding regimen of the Basic School in Quantico, Virginia, and went immediately to Vietnam, where as a rifle platoon and company commander in the infamous An Hoa Basin he was awarded the nation’s second and third highest awards for valor, the Navy Cross and the Silver Star Medal, as well as two Purple Hearts.

As a journalist he received a national Emmy award for his PBS coverage of the Marines in Beirut, Lebanon in 1983, and in 2004 he was embedded with the Marine Corps during combat operations in Afghanistan. The author of nine books, his first novel Fields of Fire is widely regarded as the classic novel of the Vietnam War, and has been mandatory reading in the Marine Corps for more than twenty years. During the late 1980’s he served in the Pentagon as Assistant Secretary of Defense and then Secretary of the Navy.

His brother, Gary, was a Marine Corps helicopter pilot during the Vietnam era. His son Jim and his son in law Brendan Geraghty are both Marine Corps combat veterans of Iraq, and both still serve as infantry sergeants. 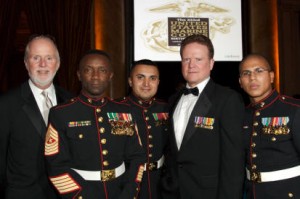 “There is no institution in America that better exemplifies leadership, sacrifice and courage than the United States Marine Corps,” said Webb. “As a Marine, I learned well both the obligations and the lifetime responsibilities of true stewardship. Those of us who are entrusted with positions of leadership are also expected to retain a loyalty to the people that we lead that does not end when we take off the military uniform. It carries on for the rest of our lives. This is one of the reasons that I felt so strongly about the need to pass a new GI bill for our returning veterans and why I introduced legislation to give our troops adequate time at home between deployments.”

Over the course of his career in government and as a writer, Webb has received numerous other awards from veterans organizations, including The Military Coalition’s 2008 Award of Merit, the Veterans of Foreign Wars (VFW) 2008 Gold Medal and Citation of Merit and their 2001 News Media Award, the American Legion’s National Commander’s Public Relations Award, the Marine Corps League’s Iron Mike award, and the Medal of Honor Society’s Patriot Award—an honor he shares with former President Ronald Reagan.

In September, Webb was named one of Esquire Magazine’s 75 most influential people of the 21st Century for doing “more to repair his party’s relationship with the military” than anyone since the end of the Vietnam War.