WASHINGTON — Jim Webb’s parents taught him early what it means to be a leader.

“Different families have different discussions at the dinner table,” he said. “Ours was how you lead people; how do you take care of people?”

Those talks typically culminated in this question: “What kind of leader do you want — a leader who will make you do something, or make you want to do something?” he told the Tribune-Review in an interview on Capitol Hill.

He knew then that his life’s calling was “this alternating cycle of public service and independent entrepreneurship.”

Webb, 69, the former senator from Virginia, is pondering whether he can gain the support necessary to make a successful run in 2016 for the Democratic nomination for president. …….. 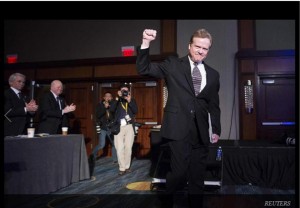