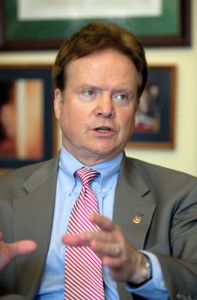 WASHINGTON–An influential senator in U.S. military policy called the decision to separate the Futenma relocation issue from a transfer of U.S. Marines from Okinawa to Guam “wise.” The remarks suggest that the decision might lead to U.S. congressional approval of funding for such a move.

“I think it was wise for the negotiators to set this Futenma issue aside as they’re trying to determine the best presence on Guam,” Sen. Jim Webb, a Virginia Democrat, said in a March 15 interview with The Asahi Shimbun. “A lot of contracts on Guam have been held up until we can resolve what this will look like. We don’t want to slow this down; we want to fix it.”

Webb is chairman of the East Asian and Pacific Affairs Subcommittee under the Senate Foreign Relations Committee as well as a member of the Senate Armed Services Committee. Last year, Webb and two other Armed Services Committee members issued a proposal that called for integrating functions of the U.S. Marine Corps Air Station Futenma at Kadena Air Base, also in Okinawa Prefecture, rather than relocating Futenma to the Henoko district of Nago, Okinawa Prefecture.

More recently, Japan and the United States have agreed to separate the Futenma relocation issue from the transfer of 8,000 U.S. Marines from Okinawa to Guam.

Webb’s positive appraisal of the delinking of those two issues indicates that the Senate might move toward approving funding for transferring the Marines to Guam.

If that should happen, the agreement between Japan and the United States to transfer the Marines to Guam would move forward.

Webb has long opposed the proposal to relocate Futenma to the Henoko district because it would be expensive and not achievable due to local opposition.

For that and other reasons, Congress rejected all expenditures related to the transfer of Marines to Guam in the budget for fiscal 2012 that runs from October 2011 until September 2012.

If Congress maintained that stance for the next fiscal year, the agreement between Japan and the United States on the Marines transfer would likely also have hit a roadblock.

Webb reiterated his position that the best solution was to integrate Futenma functions at Kadena in line with the proposal presented last year.

“We need something that can be implemented in a cost-effective way in a reasonably short period of time,” he said about the Kadena integration proposal.

Regarding the concerns of local Okinawa residents about greater noise pollution if Futenma functions were integrated at Kadena, Webb said, “It was misunderstood. Our suggestion was not that you increase the number (of aircraft). The Marine Corps aircraft that would go into Kadena is much quieter. I believe you would see a noise reduction.”

Webb emphasized that basing Marines in Okinawa would continue to be important from a strategic standpoint.

He added that he planned to visit Okinawa and Tokyo in early April to exchange views with Japanese officials about the situation surrounding the realignment of the U.S. military in Japan.