The Price of Duty 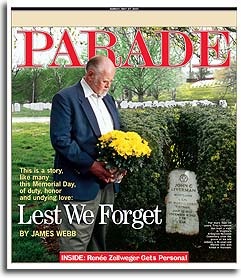 Johnny Liverman died in Vietnam more than 32 years ago, yet his father, a decorated World War II veteran, still maintains a graveside vigil. On this Memorial Day, they’re a poignant reminder of our nation’s citizen soldier legacy.

My office looks out on Arlington National Cemetery. Finishing a jog or restless with my writing, I often stroll its rolling hills and think of those who served our country during troubled times, now gathered in their final formations. Frequently, I find myself in one small corner of the cemetery where my father is buried, not far from a heroic squad leader who died under my command in Vietnam.

It was there, 10 years ago, that I first noticed Troy Liverman. He was on his knees, tending a grave that, unlike the others, was surrounded by a carefully trimmed shrub. His nearby car had a Marine Corps bumper sticker and Purple Heart license plates inscribed “45 & 68.” I assumed he was a retired career soldier who had been wounded in World War II and Vietnam, perhaps visiting the grave of a departed wife. But on my next visit, I went to the grave and saw that it belonged instead to his son. Marine Lance Cpl. John C. Liverman, 19, had been killed in Vietnam on December 11, 1968. I also noticed, with some amazement, that I had been wounded on what would have been his 20th birthday – July 10, 1969.

I would see Troy Liverman several times a year after that, on his knees before his son’s headstone. The shrub remained neatly trimmed. Throughout the year, pots of yellow and white chrysanthemums were left in front of the marker. In December there would be a Christmas blanket, an elaborate tapestry of leaves and flowers. Over time I was taken by the power of these simple expressions of love, for in his visits I could see clearly the terrible burden borne by families that share a tradition of military service.

Johnny’s grave became a landmark for me. Walking past it, I would remember the only time I saw my career-military father cry, when “Danny Boy” came on the radio as I prepared to ship out for Vietnam. Seeing Troy Liverman kneeling in the grass, I would think of my own son, growing up with a citizen-soldier legacy reaching back to the Revolutionary War, who already had told me he wanted to be a Marine. Embodied in Liverman’s tragedy and its remembrance was the haunting tightrope so many American families walk every day: We teach our children that there is honor in serving our country, yet we live in dread of the price they may be called upon to pay.

It took me a long time to approach Troy Liverman, but once we met, it was only minutes before I began to think of him as a friend. He is a gruff, no-nonsense man who, at 74 bears the scars of a cancer operation and a hip replacement and still carries a knob of shrapnel in one leg from World War II. He gives his opinions bluntly yet sees humor in unexpected places.

Liverman grew up in Washington, D.C., where his father had moved from North Carolina to drive a cab. He became a soldier at 17 and in the final months of World War II was seriously wounded by a German mortar shell. Married at 20, a father at 22, he worked as a meter-reader for the Washington Gas Light Co., bought a house in the Maryland suburbs and raised three sons who became the focal point of his existence. The boys went to parochial school, played sports and listened to their father’s homilies. On special days such as Easter and Christmas, there were cards and adoring notes to their dad. Troy Liverman still keeps them.

“There’s no way to describe the feeling that I have for my sons,” Liverman says today. “I don’t know what I did to deserve this kind of love.”

Like their father, when their time came, all three sons volunteered for the military. The eldest, Robert, now a corporate executive in Texas, was wounded in Vietnam in 1968 as an Army lieutenant, calling artillery onto his own position to stop an enemy attack. The youngest, James, who died five years ago of a liver ailment, served in the Marines after High School. But the middle son, Johnny, had it the hardest.

A shadowbox on a wall in Troy Liverman’s rural Virginia home binds him and his sons together — four men, three bronze Stars, six Purple Hearts. A professionally bound scrapbook recounts Johnny’s life, from childhood report cards to his final days in Vietnam. Looking at his photos and notes, one meets a tough but loving kid with James Dean looks and a strong sense of family loyalty. He had lost cartilage in both knees to football, which could have excused him from the draft. Instead, he volunteered for the Marines. A picture in the scrapbook shows a smiling Johnny just after he enlisted in the summer of ’67, holding a sign that reads “BEFORE.”

There would be no “AFTER.”

Johnny reached Vietnam in January 1968, just in time for the Tet Offensive, the worst fighting of the war. He was 18. His childhood friend and next-door neighbor, “Trippy” Streeks, had just been killed during the siege of Khe Sanh. Johnny reported to the famed “Walking Dead” — First Battalion, Ninth Marines — and was immediately thrown into heavy combat. In early March he was wounded in the shoulder by shrapnel. In late April he was hit again by shrapnel and suffered a serious gunshot wound to his thigh. “The fighting was so fierce that they couldn’t get him out for two days,” Troy Liverman remembers. “He almost bled to death.”

His wounds entitled Johnny to go to Okinawa, where he could have remained for the rest of his tour. But he grew restless. Learning that a close friend from his old unit had been killed, he volunteered to return to combat. “Grandma told me for yours and Mom’s sake don’t go back to Nam,” Johnny wrote to his father. “But like you always said Dad, ‘A job worth doing is a job worth doing right.’ I’m getting straight with myself. I have to go back and finish the job.”

Back in Vietnam, Johnny was assigned to the Second Battalion, Fourth Marines, in the rugged terrain near the demilitarized zone. On Dec. 11, 1968, his company fount an extended battle along infamous Foxtrot Ridge. Johnny was wounded for the third time early in the battle. As the fight wore on, a bullet hit him in the head.

Troy Liverman was managing the night shift at a McDonald’s in Rockville, Md., when a Marine Corps officer came in. It was just before Christmas, and the Marines had been busy with their seasonal Toys for Tots program, so it was not unusual to see an officer in dress blues in the restaurant late at night. But when the young lieutenant asked for him by name, Liverman knew.

“You think you’ve had disappointments and troubles in your life,” he says. “But they all add up to nothing when a man is telling you your son is dead.”

Johnny was buried a few days after Christmas on a slope that looks out from Arlington toward the monuments on the other side of the Potomac River, a short walk from the Iwo Jima Memorial. Few graves surrounded his then, but over time the cemetery has filled. In the early days, Troy Liverman spent countless hours at his son’s grave, working out his grief. Against cemetery rules, he brought in sprigs of shrubbery, planting them around the stone and tending them himself. “The caretakers didn’t mind,” he remembers today. “They all knew me. I spent more time in the cemetery than they did.”

In the summer of 1969, anti-war protests were held at the Pentagon, only a mile from Johnny’s grave. When Troy Liverman heard that protest leaders would be reading the names of Vietnam dead, he became incensed and staged a one-man counterdemonstration. “When they saw me, they huddled for a while. Then the leader of the demonstration came over and told me they wouldn’t be bothering me.” Liverman says. “I told him that was a wise decision.”

On three different days, he stood in the heat across from the rallies, carrying a sign that termed the demonstrators “parasites.” It made the papers, but his motivation was simple loyalty to his son. “They had a right to protest,” he says, “But they had no right to use his name to undermine his cause. My son was not a victim. He died serving his country.”

When it comes to Vietnam, the years have not particularly mellowed Troy Liverman. The Clinton era was especially difficult. If he had known that a man who avoided serving while criticizing those who answered the call in Vietnam would someday be elected President, he reflects, “I would have pushed my sons into the basement and locked the door.” And yet, hearing him say it, one knows that he would never have done it. “One of the things I’m proudest of,” he says, “is that all four of us were true volunteers.”

The years go by. The old veteran moves more slowly now. The sprigs he planted more than 30 years ago have grown into a thick shrub that surrounds Johnny’s headstone on three sides. An apple tree, once a sapling, overshadows the grave. But above all, Troy Liverman has remained firm in his devotion – to his son and to his cause. And those of us who fought in the war that took Johnny’s life cannot help but look at his father with an enormous sense of gratitude. What more could we have asked for, had we ourselves not survived?

Every time I pass Johnny Liverman’s grave in my strolls through Arlington, I think of son and father, father and son. I am thankful I lived to bury a father who had entered his dotage, and I pray that when I am a very old man, my son may likewise bury me. But always in my heart I will honor Johnny and the others like him, who got straight with themselves, who disregarded shrapnel and gunshot wounds and went back to finish the job. Who gave us everything they had. And who, as we grow old, will always be 19.