When A One-Armed Man Is Not A Loser 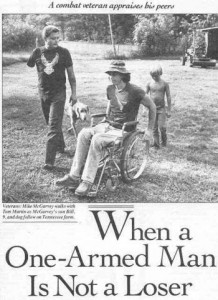 The day the piece of shrapnel ripped his arm away just below the shoulder, a clean swipe like a hot knife that left the arm itself intact at his feet, I cried. Mike McGarvey was my radio operator, which in a Marine rifle platoon is tantamount to shadowhood, alter ego, little brother. Everywhere I walked, he was two steps behind, carrying the PRC-25 radio that linked us to the company. Nights we slept on the same poncho, talking for hours in the darkness about home, aspirations, love, God–our soul. McGarvey was the fifth radio operator I had lost in three months. I had lured him to the job because I liked him. He was competent. He was a friend. He was 18.

I sat next to him in the sunbake of a pocked, clay-dust hillside, waiting for the medevac helicopter to carry him away. That large green bird had hauled dozens of young men who had trusted my judgment to the cool blue sheets of hospital beds, to scarred uncertain futures-and I could no longer hold back the frustration and the anger. He saw my tears, fixed me in a squinting stare and shook his head.

“Knock that stuff off, Lieutenant. It’s only an arm.”

Within a week, McGarvey wrote the platoon a letter–left-handed. When he finally left the hospital, he went to a tattoo shop and had a ring of blue dashes inked around what remained of his arm. Just above it was inscribed “CUT ALONG DOTTED LINE.”

He is a master of the coined phrase. Not long ago, he and I were riding through Nashville with Tom Martin, another platoon member. Martin had been clipped on the spinal cord by an enemy bullet a week before McGarvey lost his arm. His legs are paralyzed. Using hand controls to drive and caught in a slow lane, Martin suddenly lurched into the next lane. Brakes screeched behind us. Horns blared. McGarvey was quiet for several seconds. Finally, he drawled, “I always did say, never trust a man who won’t keep one foot on the brakes.”

And Martin gives it back. Later, on the set of a popular television show where we were to promote my book, Fields of Fire, a famous personality was on camera, complaining of the tortures of tennis elbow. Martin nodded toward McGarvey’s empty sleeve. “That’s your problem, McGarvey. You need to rest that elbow.”

“Yeah,” said Mack. “I can’t hit a tennis ball worth a damn lately.”

Martin and McGarvey walked together into the teeth of the tiger, and if they came away a little chewed up, they gained insight and wisdom in the trade. About themselves. About each other. About people under stress, and about values.

Neat little story, happy ending-if one can erase the hurt of an angry decade, if one works mightily to forget the years of a nation incapable of or unwilling to ratify the experience that tore its warriors’ bodies apart, leaving them to stew in the bitter juices of an effort begun nobly and ending ignominiously.

Perhaps I should not write that McGarvey was spat upon and pushed around by antiwar protesters on his first trip away from the amputee ward in Philadelphia, or tell how he and another amputee were derided for wearing their Marine Corps uniforms to a college gathering place. It is uncomfortable, in 1982, to recall that members of the same age group, men who had not seen fit to serve, could so cruelly question the morality of men whose “crime” had been to bleed for their country. This was not an unusual experience. Fred Downs, another arm amputee and author of The Killing Zone, was crossing a street at the University of Denver at about this same time, having just returned to college. A man asked if he had lost his arm in Vietnam. When Fred said yes, the man told him, “It serves you right.” 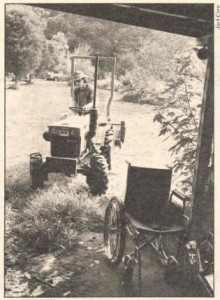 Perhaps it is unfair, in the rueful afterwash, to remember all the long roads and the lonely days of Tom Martin, his athletic frame bent forever into the outline of his wheelchair. Tom Martin, articulate and handsome, could have mouthed all the words to remain a student at Vanderbilt University and evade Vietnam without stigma, as did many others. Tom Martin, who later could have condemned the war and been an immediate media star, possessing all the requirements, from good looks to a wheelchair. Tom Martin, who kept a “NO AMNESTY” sticker on his mirror, not out of vengeance, but out of a principled relief that we were a Nation of laws, not specially privileged people. A man who had enlisted out of conscience, the truest act of morality, and who once outlined the great, forgotten distinction of the entire war in a letter to his father after our platoon had waded ankle-deep in blood and carried out of a small hootch the bodies of Vietnamese civilians killed by Communists for gathering to hear a speech made by a South Vietnamese official who also was slain. Such murders by the Vietnamese Communists were policy, as when they had killed almost 3,000 civilians in Hue, a month before My Lai. Our widely publicized “war crimes” were aberrations of policy, deservedly condemned but undeservedly elevated to symbolic events. Tom had written that to his father, in 1969.

But no one listened in 1969, nor for a long time after that, unless a veteran’s perceptions fit the preconceptions. So you kept your mouth shut, unless you were with each other. Mike McGarvey invented a thousand stories about how he had lost his arm. I met a man in Nashville who was convinced that McGarvey had lost it fighting an alligator.

But the pride still burned. It was like a delicious secret among those who had served, a reservoir of strength. And for those lucky enough to stay in contact with fellow veterans, it became heady stuff, the glue of a fierce, unbending friendship.

Like the time a few years ago when McGarvey needed a job. Not a turnstile, pick-up-the-trash, dead-end job, but an occupation. Product of a hard- scrabble Southern Illinois farm, he had enlisted in the Marine Corps, hoping to gain the credentials to become a policeman. That dream had fallen into the dust with his arm, in the summer of 1969. Now he wanted to become a motorcycle mechanic.

The Veterans Administration had certified Mc Garvey as trainable, but no one wanted to chance him. For six months he banged on door after door. The economy was down, and there was hesitation in the eyes and words of many prospective employers. Vietnam Veteran. Drugs. Mai Lai, walking time-bombs.

Enter Tom Martin. Soft-spoken and introspective, Martin had been a treasure in my platoon. His anchor was wisdom. His gift was insight. He had gone on to Vanderbilt Law School after his hospitalization, then bought a small farm near Nashville. He resolved to help McGarvey.

One afternoon, Martin wheeled into Lannie Boswell ‘s Harley Davidson dealership in Nashville. He spent an hour with Boswell, quietly selling McGarvey, talking of Vietnam, dispelling the almost automatic fears about vets and instability and drug use created by media depictions. Boswell’s business had grown from $300,000 to more than $2 million in 15 years. He brought McGarvey down from Illinois for an interview. Then he hired him.

Today, McGarvey runs Boswell’s parts department. “We never babied him,” says Boswell. “He’s done a hundred percent of what we ask everybody else. Our customers like him, he’s got a good memory, and he’s loyal. I couldn’t ask for more.”

Because Vietnam veterans’ war experience so often isolated them-within their age group only 11 percent of the draft-eligible males ever served in Vietnam-and because their service has been so misunderstood, when veterans meet, often they experience almost immediate trust and understanding. As they waited for their country to comprehend the value of their service, they began to help each other. It began with quiet advocacy, with the simple concern of people like Tom Martin for friends, men who had proven themselves on the battlefield. It has evolved into an unusual government program that relies principally on unpaid volunteers.

Tom Pauken, the director of ACTION, an umbrella agency for public service groups, was struck with the idea of formalizing the process when he attended a reception for Vietnam veterans a few years ago in his native Dallas. Many in the room were highly successful. Yet Pauken, a prominent attorney who had dealt with several of them for years, had not known they were veterans. Why, he wondered, is this part of the Vietnam veteran community so submerged, while those who are troubled are so visible? And what effect would it have on public perceptions of Vietnam veterans if these men came together to dispel the myths and help the others?

Pauken created the Vietnam Veterans Leadership Program. For three years and $6 million–less than it cost to fight one single day of the Vietnam war– the leadership program will operate from 50 sites throughout the country. At the end of this three-year period, it will go out of business.

Each site has a volunteer chairman usually a prominent member of the community, a paid program director, and several volunteer committees designed to promote individual veterans’ talents. The response among veterans has been “nothing short of astounding,” says Pauken. Three Medal of Honor winners, several self-made multimillionaires who own their own businesses, key officials in large corporations, attorneys, men who have overcome severe combat injuries-including two blinded veterans who completed law school and are members of the bar-have adopted a common goal: to honor the validity of service to country.

The principal aims of the program are to aid in job-placement, and help reshape public perceptions of Vietnam vets. (If you would like more information, write the Vietnam Veterans Leadership Program, ACTION, Room M600, Dept. P, 806 Connecticut Ave. NW. Washington, D.C. 20525.) The programs vary with their locales. The Southern California program, under Medal of Honor winner Leo Thorsness, focuses on television and movie studios, by far the worst offenders in perpetuating negative imagery of Vietnam vets. Many groups are arranging meetings with newspaper editorial boards to present data that refutes negative myths about veterans. Some examples:

Ninety-one percent of Vietnam veterans say they are “glad they served” and 74 percent say they enjoyed their time in the military. Two out of three state they would serve again, even knowing the outcome of the war. (Harris Survey of Jury 1980)
There is no difference in drug usage rates between veterans and non veterans of the Vietnam age group, according to a Veteran. Administration study. Two-thirds of the men who served in Vietnam enlisted; two-thirds of those who served in World War II were drafted.
Membership in Vietnam Veterans Against the War never exceeded 7,000, of a potential 9 million.
Vietnam veterans are less likely than non-vets to be in prison, says the Federal Bureau of Prisons.
Volunteers accounted for 77 percent of combat deaths in Vietnam.
Eighty-six percent of the men who died in Vietnam were Caucasian; 12.5 percent were black: 1.2 percent were of other races.
Ninety-seven percent of Vietnam vets were discharged under honorable conditions-the same for the 10 years prior to Vietnam. 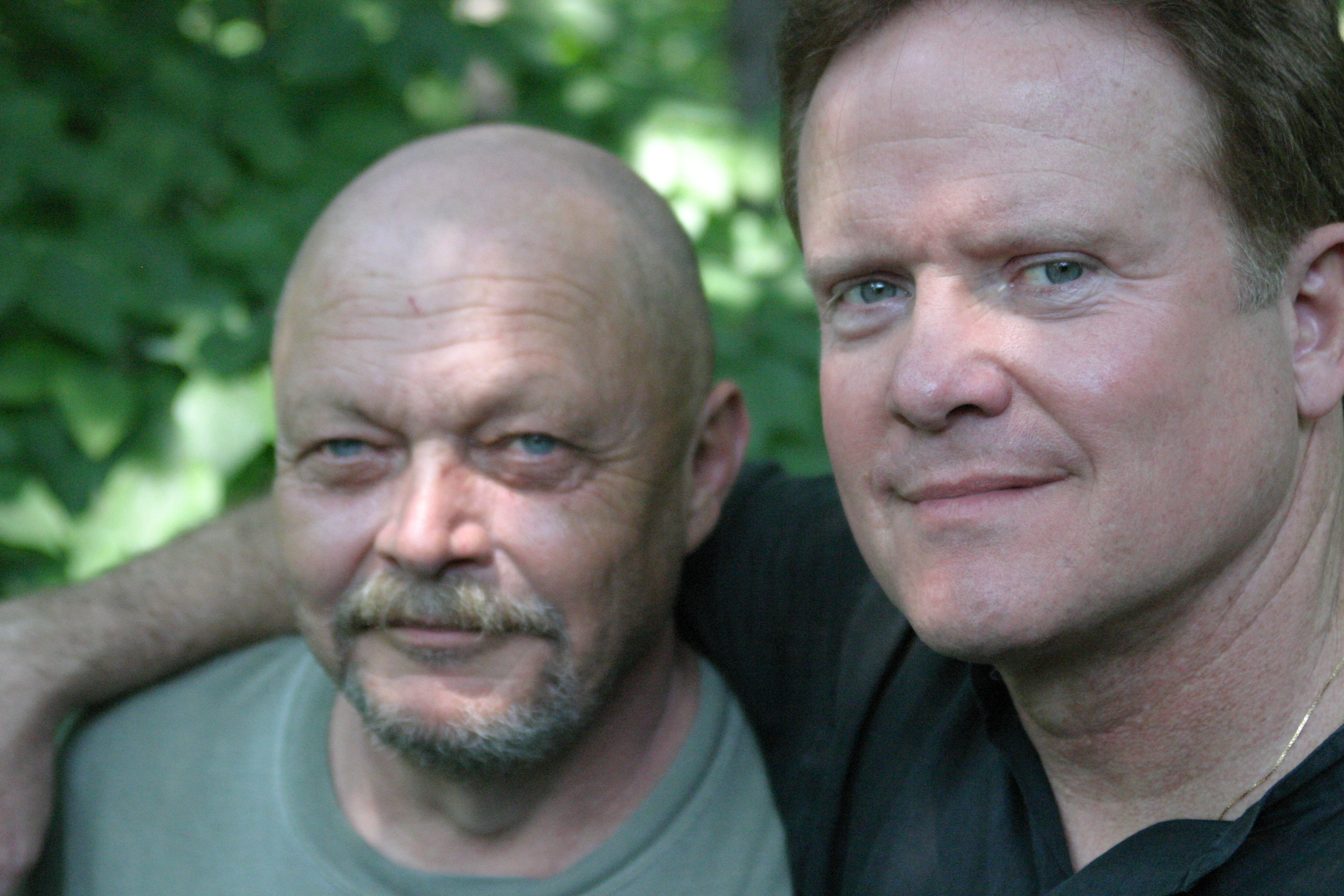